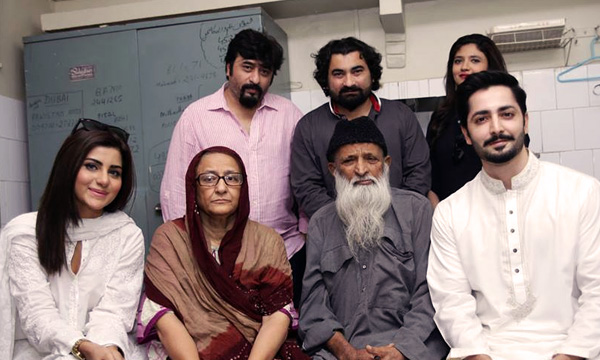 The cast of ARY Film’s upcoming rom-com “Wrong Number” visited Edhi Foundation to meet the legendary humanitarian Abdul Sattar Edhi along with his wife Bilquis Edhi and the children at the center.

Present at the moment were Danish Taimoor Sohai Ali Abroo, Janita Asma along with Yasir and Danish Nawaz. The celebrity band paid their respects to the unsung heroes of our nation and presented the philanthropist pair with a bouquet of flowers.

While they jovially played games and distributed goody bags amongst the kids, the cast apparently could not help taking candid selfies with members of the Edhi family.

Meeting this woman today was such an honour! Total inspiration #WrongNo #Edhi pic.twitter.com/6uYlitNZmG

Also, the movie’s members are up and about at various radio stations in the city for Wrong Number’s promotion before it hits the silver screens.

Slated to hit the cinemas this Eid, Yasir Nawaz’s Wrong Number is garnering high expectations from the Pakistani audience.

With HUM TV’s Bin Roye also up for a grand Eid release, both the movies will be witnessed in an entertaining tug-of-war at the box office.