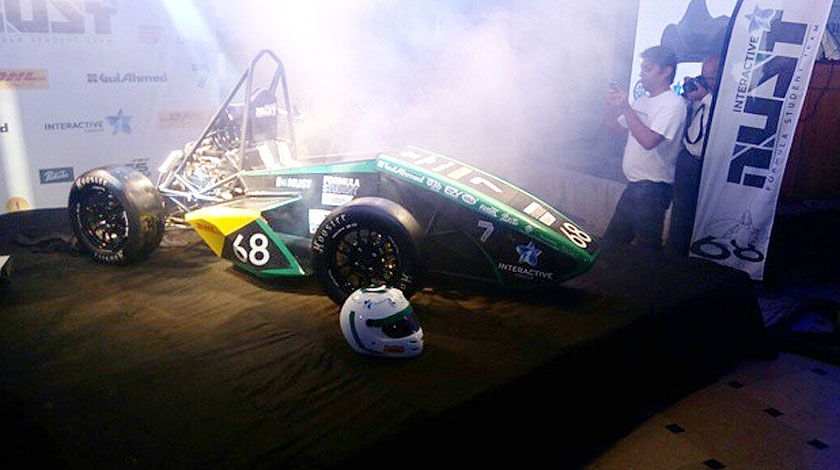 A team of talented undergraduate students is selected for the Europe’s most sought after educational motorsport competition, the Formula Student (FS). The race car for this year was laid open at the Maritime Museum on Thursday.

The students have built a race car, called the NAS15. The sleek invention will be competing 135 teams from 28 different countries at the FS competition, which will be held at Silverstone, UK from July 8th till July 12th 2015.

The NUST team comprises of 25 young proficient U-Grads who worked tirelessly for eight months to design a race car that would match the standard of the competition. This annual competition is organized by the Institute of Mechanical Engineering.

The team follows a hierarchical structure where each team member is responsible for a different operation and plays an evident role in their own potency. The team consists of an engineering and mechanical department, a marketing and business department, and then there are the drivers of the NAS 15. Currently, the team consists of 4 drivers, who are preparing well for the competition. One of the drivers, Umair Ahmed, expressed his views about the safety measures they have to take and the brutal training they have to endure in order to be deemed fit for the competition. In his own words, “We first train in a simulator, and now that the car has been unveiled, we will train with it”.

Sama Shazli, one of the five girls who are taking part in this competition, expressed her concerns about the safety while driving a race car, she said, “Race car driving is not just about rash driving. There are certain rules involved as well as safety procedures, especially on the competition level. This is the kind of awareness we are trying to create.”

The model of the car designed for this year’s competition is very trendy and apt in comparison to that of previous three years.

The car has shed off almost 75 kgs of weight and is now deemed to be faster and sleeker. The team principal, Afnan Ahmed, while talking about the design and speed of the car said, “It is lighter, and the use of the composite material of carbon fibre makes it faster. The highest speed it can attain in 121km/hour but what is really incredible is that it can accelerate from zero to 100km/hour in under four seconds.”

NAS15 was named after Captain Nadeem Ahmed Shaheed, senior Pakistan Navy Official, in order to pay tribute to him for his services offered. He was the Faculty Advisor of Formula NUST Racing and a patron to the team as well. He was shot dead in 2013.

NAS15 will also be conducting roadside shows in order to attract the masses and to draw attention towards the event. The first show, along with different games and activities, will be brought on the road on June 13th and June 14th at Port Grand and later on, it will be showcased at Dolmen Mall, Clifton as well on June 16th.

We urge you all to visit the above-mentioned venues in order to witness and appreciate our nation’s upcoming talent.

We hope that the team attain new prominence.