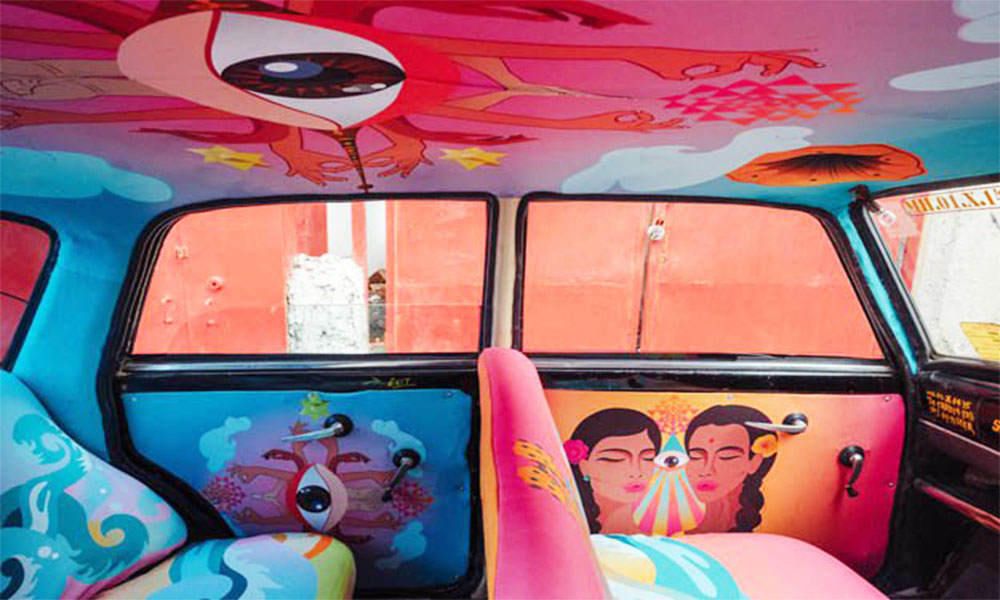 Taxi Fabric was an initiative taken on this year’s Independence Day to highlight the similarities between the two nations.

The owner aimed to let people know that despite all the hatred, the only thing that really  separated India and Pakistan is a border, not the people or the culture.

Taxi Fabric, an initiative taken by Sanket Alvani, transformed the interiors of Mumbai’s popular black and yellow cabs, with the help of two designers; a 29 year old designer from Pakistan and an elderly Sikh driver from Mumbai.

“The idea behind the designs for Taxi Fabric was to show how intricately and strongly Pakistanis and Indians are connected, not just through our history of independence but through similarities between our people, cultures, traditions, superstitions, idols and so on, making us essentially the same kind of people,” Arif told The Express Tribune.

The elements of the design of this taxi is very well-thought out and consists of the commonalities that the two nations possess as well as their unique characteristics, such as the depiction of music through guitar necks and gramophone horns. “For the designs, I also picked up on hand gestures and geometric patterns common or unique to both cultures and religions such as a Dua or a namaste and amalgamated them into a visual collage around a seascape, since the water and sea are connecting points for the two countries,” she added. Elaborating on her design, the Indus Valley School of Art & Architecture graduate said, “Additionally, I added details to convey the mystic and spiritual nature of both nations, while playing with symmetrical compositions to reciprocate our likeness. The beach and a water park in Mumbai were also places that held a soft spot for the taxi driver, Satmant Singh, something I predominantly included in my designs to give him some sort of respite in Mumbai’s endless traffic jams.”

However, the Pakistani designer who worked from Karachi is yet to see her designs personally and she hopes to visit India soon for that matter.

Overwhelmed by the response to her design and appreciation from Indians, the 29-year-old said, “The project itself has been a great learning experience, and I’ve gained some precious friends through it.” Samya further believes that it’s time for people to rise above bitter behavior towards each other and recognise each other’s importance in this world. She believes that we have been conditioned to hate India which s due to how the information in our history books has been presented for so long but she is happy that at least the artists are collaborating in order to celebrate art and spread empathy.

However, Samya regretted, “The current ongoing political uncertainty between the two countries does make it hard for collaborating artists to travel to each other’s states, hold or be part of festivals, concerts and exhibitions together. Which is really quite disheartening, considering the amazing collaborations and art projects upcoming Pakistani artists have been a part of and should be a part of, and how much India could help in terms of exposure and providing us with a corresponding, collaborating partner.” If you get a chance to sit in Singh’s taxi, don’t forget to read the heart-winning lines stitched at the back of his seat. It says, “India and Pakistan. Separated at birth, siblings who grew up and forgot how much they love each other.”

We are in love with the design of the taxi and the thought behind it. What do you think?