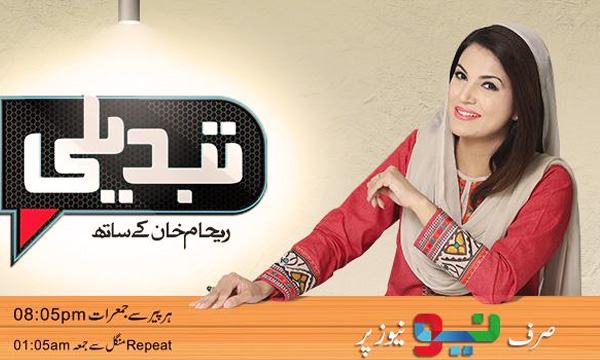 Reham is not leaving any stone unturned when it comes to the promotion of her new show. PTI chairman’s former wife follows the famous PTI slogan: Tabdeeli aa nahi rahi, tabdeeli agayi hai, and she has used it quite wisely!

Yes, you got it right! Even though the former cricket star and current PTI chairman, Imran Khan has been screaming ‘tabdeeli agayi hai’ from top of containers and from behind podiums over the past two years, Reham’s new show “Tabdeeli Reham Khan Kay Saath” promises to deliver ‘real change’.

Watch the promo of Reham Khan’s Exclusive Show below;

The former BBC reporter has been trending with the hashtag #tabdeeli on Twitter in order to promote the show and several people have openly shared their views about Reham’s ‘Tabdeeli’. Let’s just say some are not as happy with the slogan.

The first episode of the show aired on Neo TV yesterday and discussed the critical topic of Reham and Imran’s Divorce. The show functions on a talk show format; the topic of discussion yesterday was women and how they are scrutinized after divorce.

References of Reham-Imran divorce were given time and time again. Let’s watch some interesting clips from yesterday’s show below;