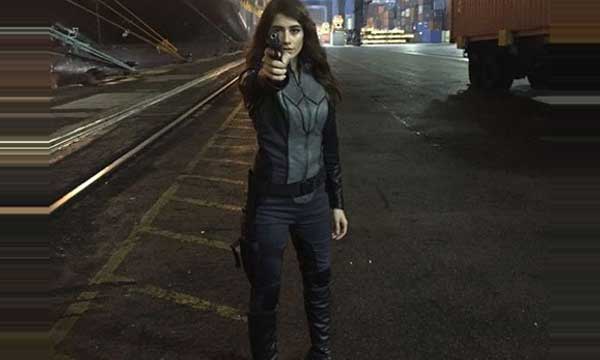 The Pakistani starlet, Syra Shehroz has proved time and again that she is more than just a pretty face in the industry. From a super chic mother, playing the damsel in distress in many serials to portraying a vamp’s character just as effortlessly, the diva is a natural talent with far more potential.

Syra’s super sexy images from her highly anticipated movie, ‘Project Ghazi’ recently surfaced on the internet and fans are totally losing it.

Syra’s hot new look in a costume with a gun in her hands sure looks like a perfect amalgamation of Catwoman, Black Widow, and Wonder Woman.

Pakistan’s first ever superhero movie, Project Ghazi has been in the spotlight since it was announced and has the fans more than excited! The details of the costume and some other BTS videos and pictures are a reminder of how hard the team is working to make this project, a memorable one. Still shooting, the film has completed 75% of its production and the hype is rising with every passing day.

According to producer Ali Raza, the film is slated to release in 2017. Exploring a new genre in the Pakistani film industry, the film sure has its risks and we just cannot wait for the project to officially unveil.

A post shared by Lollywood Superstars (@lollywoodsuperstars) on Jan 5, 2017 at 8:32am PST

With 3D Printed costumes for the cast and a compelling storyline, the film is bound to be at par with international superhero flicks! As the producer unveiled, the characters will be very relatable and fitting to the Pakistan.

The movie’s story line will portray themes of love, loss, and patriotism. Other than the leading trio, the movie’s supporting cast also appears to be quite promising.

We just can’t for Pakistan’s first ever superhero movie to be hit the cinemas! What do you think of Syra’s new look?

Comment below to let us know & stay tuned to Brandsynario for more news and updates.