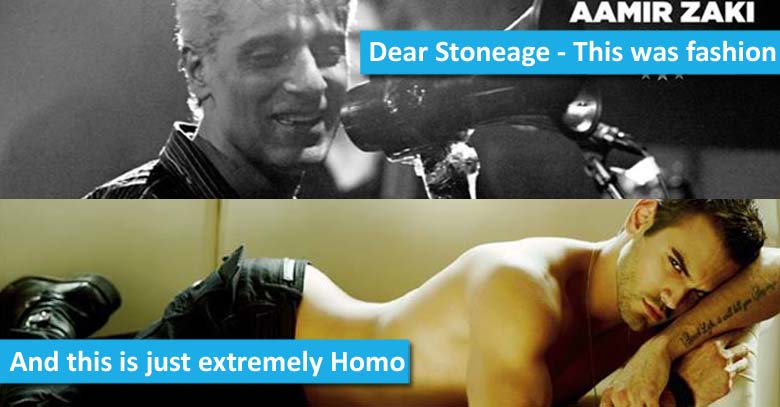 Local urban fashion brand Stoneage has recently launched its Winter Collection for 2013 on social and OOH (Out of Home) Media.

As some are awestruck with the audacity of the social media visual promotions others have immediately sensed an imitation of well-known positioning strategies used by Calvin Klein, Armani and Versace.

These are some of the world’s most popular brands when it comes to contemporary denim clothing. They are also renowned for using sex-appeal openly in their advertising.

The point of the matter being – WE KNOW WHAT YOU ARE TRYING TO DO STONEAGE!

Now as for the social media fashion photographs, one might forgive Stoneage for the bareness of the models or their audacious poses, but it’s hard to forgive them on the sudden change in the brand positioning!

As a result Stoneage’s Facebook page is half drowned in humiliating posts by self-proclaimed ‘social media religious scholars’ and has become a laughing stock for all the rest of us.

You had previously covered Misha Shafi, endorsed Bashir Ahmed, featured Omar Adil and Chaar Payee’s soundtracks and also positioned yourself proudly on patriotism. You follow that up by offending the ‘patriots’? Did you honestly believe them to tag along?

You had it golden when you positioned your brand on music, patriotism and being trendy. Why change it? Let alone the change being a desperate imitation of the European and American giants?

Don’t be offended. CK, Armani and Versace are widely criticized on the ‘excessive sexual appeal’ in their advertising campaigns, but they keep on doing it because;

A. They know how to do it properly and B. They have the audience that approve of that.

You Don’t! Your customer base comprises of millions of Pakistanis who, regardless of their social class, have a slightly less sense of inferiority and self-doubt. They are more driven on religious and patriotic values. Market research is supposed to be more beneficial than imitation.

Aside from basic advertising or basic-morality lessons, did you honestly think you could follow up Aamir Zaki with a ripped Justin Bieber look alike?

Stoneage as we recalled, was contemporary, trendy and Pakistani. We also recall the performance of Pakistani talent Char Payee in one of your stores. Stoneage branded itself with talent, Aamir Zaki, Bahir Ahmed or Char Payee, there was always a sense of elegance in your endorsements.

The recent endeavor hence is inexplicable but largely it is just hysterical.