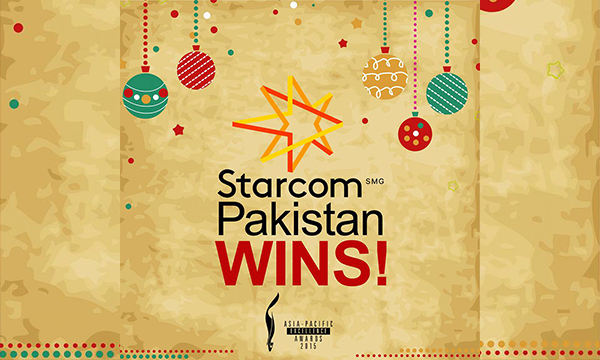 One of the leading media agencies, Starcom Mediavest Pakistan has won the Asia Pacific Excellence Award 2016 held every year. The prestigious Award honors outstanding achievements in the field of Communications and Strategic media innovations and this year Starcom bagged global recognition for one of the most efficacious and innovative campaigns.

Starcom Pakistan sent entries catering to different marketing initiatives that had created waves within the Asian market. Represented by “Coke Studio TV” in the “Content Marketing” segment, “Tarang Baaz” campaign in the “IMC Execution” segment & “Cadbury Dairy Milk’s Valentines Campaign” for “Social Media”, Starcom again substantiated its mettle by emerging as the front-runner in the three nominations that had a huge pool of 2600 nominations from all over Asia, including some of the most well-established markets such as Singapore, India and Hong Kong.

Of these nominations, Coke Studio TV by Starcom Pakistan created history and was declared the winner in its respective category and was endowed with well deserved “Excellence Award” for conceiving, executing and delivering content in a way that had previously not been done in any part of the region.