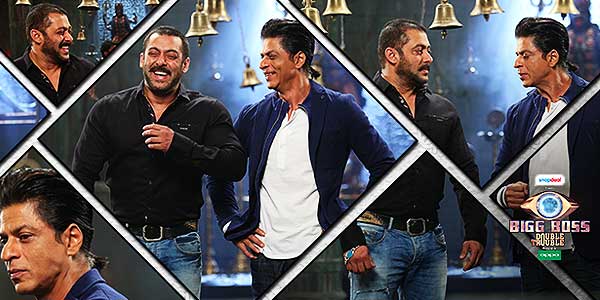 Bigg Boss Season 9’s weekend episode was a grand affair as the epic jodi of Karan Arjun aka Shah Rukh Khan and Salman Khan got into a fancy reunion for the promotion of SRK’s movie, Dilwale. The hour-long episode was nothing less than a visual treat for all Bollywood fans who were dying to see the duo together for a long time.

While giving a grand entry, the duo actors asked each other some cheesy personal questions ranging from SRK’s snoring habits to Salman’s angry mood swings. It appeared to be like a ‘who knows me well’ game, where every right answer was given a high-five, whereas every wrong answer was greeted by a happy bash (slap).

The entrance of both the actors was marked by the 1995 style of Karan Arjun days, where they re-enacted the iconic ‘Mere Karan Arjun Ayenge’ dialogue.

See some snapshots from the show in the video below:

Putting all their differences aside, the duo took a candid shot that immediately got viral on social media.

See some highlights of the show in the image gallery: