Home Entertainment Celebrities SRK or Amitabh Bachchan: Who is The Worst Dancer?
Advertisement 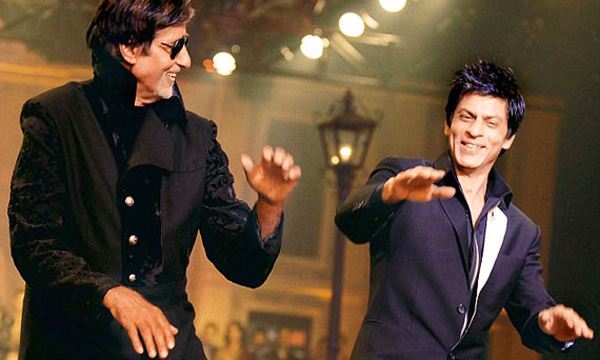 Shahrukh Khan and Kajol are dancing away for their roles in Dilwale. Bad dancing, that is. King Khan took to Twitter to boast his conquests at ‘worst best dancing’:

There’s nothing I like more than working. A dancing nite with Kajol even better.V r the worst best dancers in the world!!! Honest confession

However, the Big B of Bollywood, Amitabh Bachchan set out o prove SRK wrong!

@iamsrk WRONG .. !! You both are the best best .. I AM THE WORST WORST !! Been dancing all night too and have proved myself right !! HUUHAA

Not one to take things lightly, SRK promptly replied to Big B, putting his best.. or worst foot forward!

@SrBachchan Sir sorry, Chota muh badi baat but I will beat u at bad dancing. I am a natural interpretive dancer & my form is called Disaster

Dilwale featuring the King of romance, Shahrukh Khan alongside the 90s diva, Kajol has wrapped up its shooting schedule in Iceland.

The music of the movie has been created by Pritam and the choreographer of the movie is none other than SRK’s favorite Farah Khan herself.

The movie is scheduled to release on 18th December, 2015.