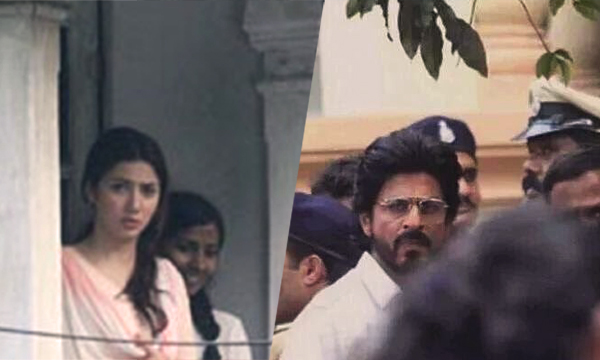 Shah Rukh Khan has been arrested! But only on set…. That’s right, in a scene for Raees, the King Khan was arrested as his onscreen wife Mahira Khan watches from the window.

Mahira, as the dutiful wife, watches from the balcony: SRK’s latest look for Bollywood movie Raees has been leaked & it’s totally different from what we expected of King Khan.

The Khan movie, as we will now be calling ‘Raees’ on account of both lead actors having the same surname, will feature the hero in glasses and sporting a bearded look.

See all the BTS pictures and videos below:

“The man in black travels with your soul in his pocket“ Stephen King. V hav both White & Black in us, choose wisely. pic.twitter.com/Excr2eW7fD My nerves weren’t being kind, but @iamsrk was.. !Got through the first scene.. #Raees The story is based in Ahmadabad of 80s. But since the city has changed over the decades, it was re-created in Mumbai’s film-city.

Rumors of Katrina Kaif to have an item song in the movie are circling the internet; however we shall have to wait for the official announcement!