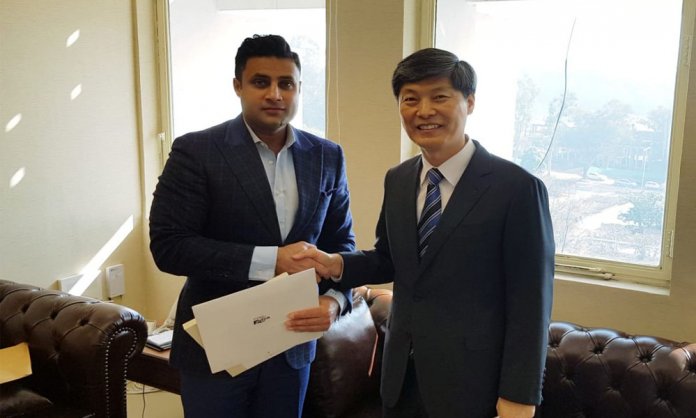 The international relations of Pakistan with other countries is improving and more countries are willing to invest and open their borders to import manpower from Pakistan.

Recently, according to The News International, Korea has also announced increasing the quota of Pakistani workers in the Republic of Korea .

A meeting was held between the South Korean ambassador to Pakistan, Kwak Sung-Kyu and Special Assistant to Prime Minister on Overseas Pakistanis and Human Resource Development, Zulfikar Bukhari.

They talked about issues of mutual interest and discussed the mechanism to increase the quota of Pakistani workers in South Korea. The South Korean ambassador assured that South Korean authorities are working to import the maximum workforce from Pakistan.

Stating that only 700 Pakistani workers were sent to South Korea in 2018, Zulfikar Bhatti said that the previous government made no efforts to pursue South Korea to increase the worker’s quota from Pakistan.

He said that the current government of Pakistan is working on more opportunities to open international markets for Pakistani manpower.

A South Korean team came to Pakistan to find potential opportunities for investment.It is willing to invest in various sectors in the country, including Pakistan railways and aims to enhance the capacity to serve better.

The South Korean ambassador also acknowledged the potential of tourism in Pakistan and said that there are many cultural heritage locations that will attract South Korean tourists.

Talking about the improved law and order situation in Pakistan, Zulifikar Bhatti said that international tourism in Pakistan can be increased. He mentioned the Tourism Taskforce made by PM Imran Khan and assured the South Korean ambassador to revamp tourism opportunities and provide easy access to tourists in the northern areas of Pakistan.

Saudi Arabia Work Visa Fee For Pakistanis To Be Reduced!