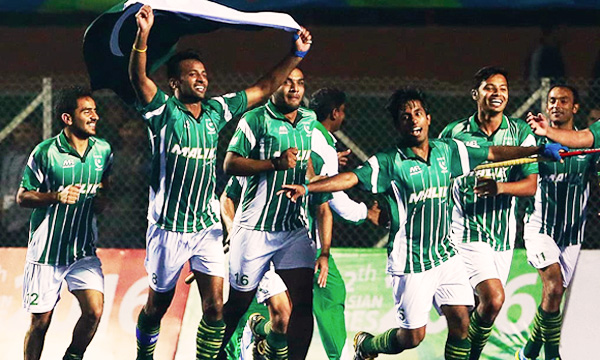 Awais-ur-Rehman of the Pakistani team scored the final goal in the extra time added in the first-half as Pakistan completed its hat-trick of the SAG hockey titles. The final was played at the Moullanna Tayebullah Stadium, Guwahati.

Pakistan team had taken momentum after the strike made by Rehman in the first half and started attacking; however there was a strong wall found in Vikas Dahiya, the Indian goalkeeper. The two power houses of men’s field hockey, India and Pakistan faced eachother for the 4th time in regional games. Pakistan defetaed in 2004 as well as 2010 final held in Colombo and Dhaka. India, however, won the gold medal in Madras in 1995.

The hockey team was congratulated by the President Mamnoon Hussain and Prime Minister Muhammad Nawaz Sharif upon winning the gold medal.

After defeating Bangladesh in the semifinals of the South Asian Games, Pakistan is all set to record the rip-roaring finals with India on Wednesday. Arsalan Qadir – part of the Pakistani hockey team, while talking to a local news channel said, “We have worked on different strategies with the coaches and video analysts and will be looking to win by a bigger margin than the last clash [where they prevailed 2-1 over their rivals].”

According to the reports, goals from Awaisur Rahman, Arsalan Qadir, Umer Bhutta, Tasawer Abbas and Aleem Bilal ensured that Pakistan stay on track to defend their crown in the regional mega-event.

In the semi final session of South Asian Games, Syed Maratib Ali and Maaz Khan won the gold medal in wushu 65kg and 70 kg, after which the gold medal tally ran up to 7 for Pakistan.

Are you all set to see the arch rival teams, India and Pakistan together in the finals?

For which team you will vote for?

Give us your feedback in the comment section below and stay tuned to Brandsynario for more updates!