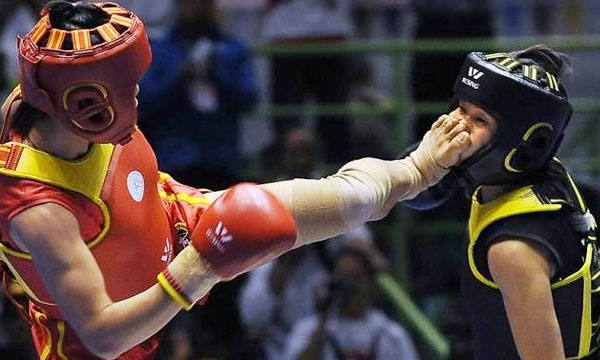 Even after sustaining a serious shin injury during the quarter-final clash with Sri Lanka’s Nid Aberathane, wushu athlete Maaz Khan bagged a gold medal in the 70 kg category at the South Asian Games 2016 by defeating an Indian athlete.

According to reports, Maaz Khan suffered some serious injuries and unbearable pain after the semi-final clash with the Sri Lankan athlete, Nid Aberathane. He endured even more painful bruises after fighting against the Bangladeshi athlete Anisur Rahman in the semi-final, the next day. Maaz, while talking to The Express Tribune said, “I don’t want anything to come between me and the gold medal, so I decided not to tell anyone.”

“I used a cold spray, applied the bandages and took some painkillers and was ready to fight. There was only one thing on my mind; to defeat my opponent,” he said.

The athlete, soon after bagging the gold medal realized the seriousness of his pain. “After the fight I was writhing in pain and wanted to go to the hospital and nothing else; I couldn’t bear the pain anymore” “As soon as we landed in Karachi, I went directly to the Liaquat National Hospital and got admitted for surgery,” he said.

Despite such bravery and devotion towards the game and his nation, no one in charge of the sports in Pakistan appreciated his attempt or sent him any congratulatory messages.

Isn’t it sad to witness such ignorance from the authorities? Give us your feedback in the comment section below.