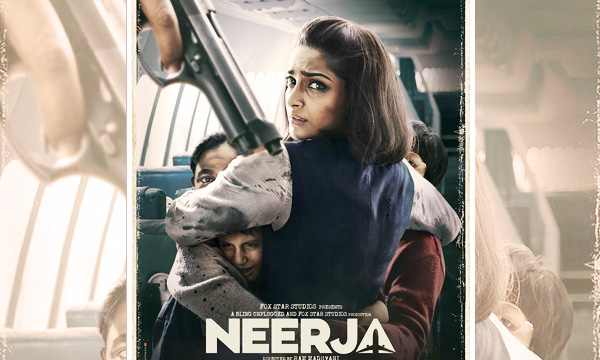 UPDATE:  The new official posters for the upcoming Bollywood movie ‘Neerja’ have been released and they are just as valiant and intriguing as we expected. Sonam Kapoor can be seen staring right at a gun to her head in the new ‘Neerja’ poster. Courage is all about staring fear right in the eye, and that’s exactly what Sonam does in the first poster of ‘Neerja’.

Sonam herself shared the poster on Twitter and wrote: “And here it is: The first poster of #Neerja. So proud! Film out on February 19.”

View the poster below:

And here it is : The first poster of #Neerja. So proud! Film out on Feb 19 @foxstarhindi … https://t.co/VmSFz6mRgG pic.twitter.com/gOMfWT7CR1

The second poster for the movie ‘Neerja’ is also out and it is more intriguing than the first one!

Her fear gave her courage to fight back. Here is the second poster of #Neerja! releasing F… https://t.co/KtFlb4Xcuv pic.twitter.com/OX01O1DMv7

If there is one Bollywood flick of Sonam Kapoor that is worth looking forward to, it’s the upcoming movie, Neerja. The trailer of the movie, released on Thursday is heightened with tension; totally matching the people’s expectations.

Neerja showcases the story of a 23-year-old Indian flight attendant, Neerja Bhanot who was on the ill-fated Pan Am Flight 73. The plane was flying from Karachi to Frankfurt and was hijacked by terrorists while on the ground in Karachi on 5th September 1986.

Neerja Bhanot was amongst those who died, but her act of heroism was lauded by all as she managed to save 359 lives. She has been feted by Pakistan, US and India as mentioned in the beginning of the trailer.

Watch the nail-biting trailer below:

The trailer glimpses into Neerja’s private life; showcasing her close bond with her family, specifically her mother played by the veteran actress, Shabana Azmi. The trailer then moves to showing the hijacking but with quick cuts and fast-paced music in the background; the nail-biting trailer manages to build up the tension as the tragedy unfolds.

Directed by Ram Madhvani, the trailer of Neerja is going to be shown on the big screen along with Dilwale.

Judging by its trailer, the movie sure looks like a winner.