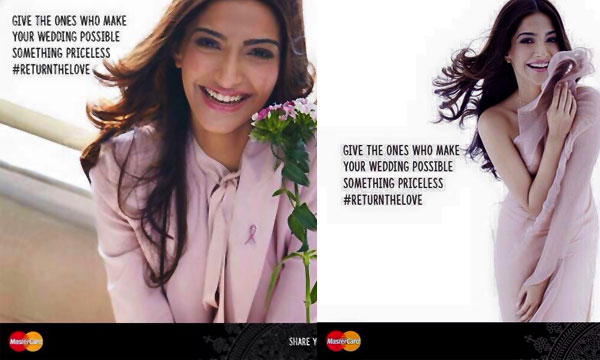 In a new advertisement by Mastercard, Sonam Kapoor reminds us to thank our parents during this wedding season. The actress, looking every bit the understated beauty that she is, looks into the camera and tells the viewers to acknowledge the sacrifices parents have made for us and do something for them in return.

The advertisement uses the hashtag campaign of #returnthelove, as a way to bring focus on the gestures our loved ones make for us and the impact that they can have.

Take a look at the advert over here:

In the ad, the actress highlights how parents give up so much for their children’s perfect wedding day, and make sacrifices out of their own happiness in order to ensure their children’s joy on such momentous occasions. By giving them a “priceless surprise”, one can repay them for all the times they have put their dreams and wants on hold for their children.

Kapoor tweeted the advertisement, adding this sentiment in her tweet: “Tell your parents Thank You for your dream wedding. #ReturnTheLove with a Priceless Surprise from #MasterCard.”

Tell your parents Thank You for your dream wedding. #ReturnTheLove with a Priceless Surprise from #MasterCard. https://t.co/MOY93F60sP

Do you think Sonam Kapoor is the right choice for endorsement of this brand. Let us know in the comments below.