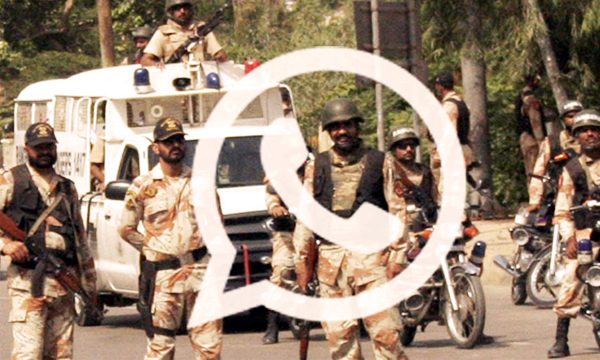 Rangers in Sindh have requested to be informed about any illegal practice or activity on their dedicated WhatsApp digits 0316-2369996 or email rangers at rangers.madadgar@gmail.com.

The law enforcers have taken this step to facilitate the citizens and help curb crime in the province. Now anyone can promptly notify the rangers via a text message or audio/video clip using the WhatsApp number and the ‘Rangers Madadgar’ will arrive in no time. Another helpline that was dedicated to the anti-terrorism cell of the country which was swamped with hoax callers’ call. As per statistics shared by National Counterterrorism Authority (Nacta), the 57,046 calls received between 9th January and 31st December on the helpline 1717 were not related to suspicious activities.

Only a tiny part, about 1,545 calls were relevant. Similar to the fire brigade helpline 16 and police helpline 15, the 1717 helpline was getting irrelevant hoax calls jamming their system.

The Nacta helpline especially to notify the authorities of suspicious terrorism-related activities was established after the terrorist attack on Army Public School in December 2014.

On the other, as this great effort is being praised, someone found a much more fun take on the new helpline showing how Pakistanis might use the app. Let’s have a look at some of the hilarious snapshots: Some people were extremely amused by these memes while others were offended: