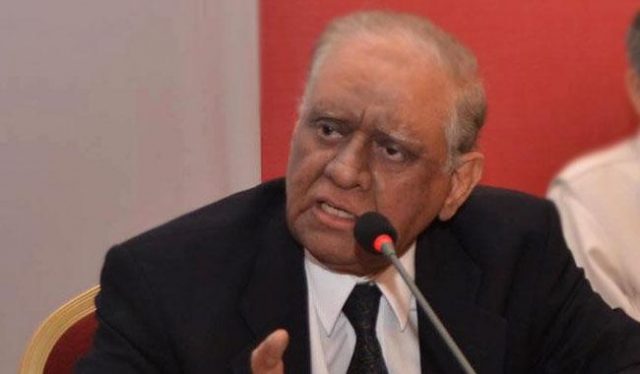 Sindh Governor Saeed-uz-Zaman Siddiqui passed away in Karachi on Wednesday. The leader complained of chest pains and was admitted to South City Hospital earlier today.

The Sindh Government has declared a one-day state mourning to pay respect to the deceased. Reports reveal that, Sindh Assembly Speaker, Agha Siraj Durrani will take charge as care-taker governor of Sindh until a new governor is appointed.

Prime Minister. Nawaz Sharif and President Mamnoon Hussain have expressed their grief and condolences over the demise of the governor.

Various leaders and media personalities also took to Twitter to express their condolences.

Sad to hear about the demise of Governor Sindh & Former CJ Saeed uz Zaman Siddiqui. May Allah SWT grant him the highest place in Jannah.

Siddiqui tried clinging with an empty title till his last breath; May Allah give all of us more self respect 😰

Sad demise of Governor Sindh Saeed uz Zaman Siddiqui. He was a jurist & legislator of great prominence. May his soul rest peace. 1937-2017

Exactly 2 months after Saeed uz Zaman Siddiqui was sworn in as Governor Sindh, he passes away. He remained hospitalized for last few weeks.

Our condolences to the family of the late governor, May his soul rest in peace.