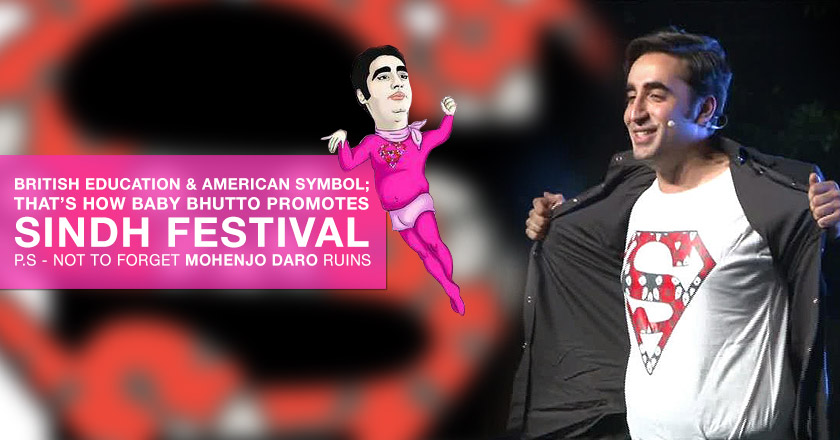 A Pakistani archaeologist, Dr. Asma Ibrahim, ensures to the people the renowned heritage ‘Mohenjo Daro’ will disappear completely in 20 years, if the current level of recklessness and lack of care persists. Of course that was before, the Sindh Festival – a commemoration which ensured that this 2 decade expiration date is met, much before its time.

Sindh Festival is a Bilawal Bhutto led mission to bring the Sindhi Heritage into International limelight (along with the obvious underlying reason to brand Baby Bhutto as the next generation decision maker, initiative-taker, and of course, the next Prime Minister).

Politicians play all kind of gimmicks to stay in the limelight. Pakistanis have seldom cared about these attention-seeking publicity stunts, unless it concerns them or – on special occasions such as this – promises to destroy the one thing they’re country is valued in the books of Archeology , Ancient Civilizations and Geography, the 2,600 year old Mohenjo Daro.

If a picture is really worth a thousand words, the pictures included in this article are worth atleast a million.

This picture depicting the historic embankment known as ‘Mohen Jo Daro’ surrounded by wooden scaffolding and construction crews, are efforts to “save this heritage”? Well, our question is from whom?

Our previous Governments have been notorious for leaving our national inheritance to rot, but even they are not known for using these archeological edifices to stage some ill-planned cheap musical night.

The Mound of Dead was discovered in 1922, accidently by R D Banerji in search of the remains of some Buddhist stupa and monastery, visible in the area. Almost a century later, we still haven’t explored half the wonders of MohenjoDaro. Even the most skilled archaeologists of our time, have not rushed into further exploration of the site, on the account of its vulnerability to factors as miniscule as the little changes in moisture present in the air. Yes, the archeologists didn’t prioritize personal glory over national interests – a statement, that cannot be said for Bilawal Bhutto Zardari.

Now, as the night of Sindh festival passed and the archaeological wonder of Mohenjo Daro sits in the aftermath of the orchestrated ‘Sindh Party Night’, covered in sparkles and left over filth as construction workers again movie stages and wooden ornaments – one questions comes to pass,

Did we actually benefited the Sindhi culture last night more than we damaged it?

“…Moen Jo Daro, stunned the world when it appeared on the world map in Pakistan – as the archeological expedition revealed, that here in ‘Pakistan’ lay one of the world’s first modern cities. It contained dug wells for accessing clean drinking water, unheard of in civilizations dating back over 4000 years.”

They said; “Not many believed that over five thousand years ago, even before the name Aryans was ever mentioned, Punjab and Sind had equipped themselves with advanced and singularly uniform civilization.”

A social cultivation that, in some respects, was even superior to that of the contemporary Mesopotamians and Egyptians.”

Meanwhile Bilawal Bhutto smiles for the camera with a ‘Firangi Friend’ in a parallel universe filled with moral indifference, intellectual oblivion and Patriotic ignorance.