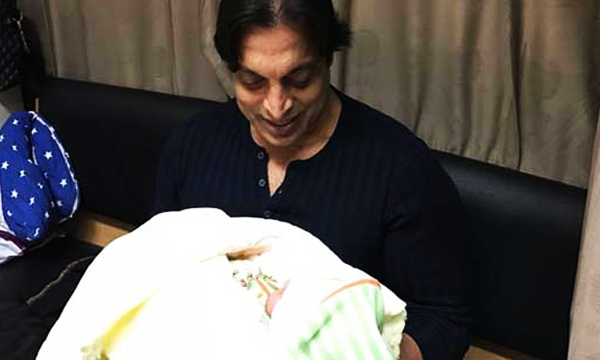 Former Pakistani cricketer Shoaib Akhtar and wife, Rubab have announced the name of the little angel on Twitter today, Friday!  The fast bowler made an announcement on Twitter, how the entire family has decided to name him Muhammad Mikaeel Ali.

Friends, tks for all the suggestions on the name, very kind of u. We've decided to name our son Muhammad MIKAEEL ALI. Proud parents!!!

He was grateful to the general public for the adorable names suggestions for his baby. The cricketer became the father of a baby boy on November 7th and was overjoyed on Twitter.

The thrilled fast bowler had taken to Twitter to announce the happy news to his fans.

Guys, am ecstatic to share that me & Begum have been blessed with a healthy baby boy just now. Oh what a feeling! Thank u Allah Pak.

The tweets of Rawalpindi Express spoke volumes about his sheer bliss on becoming a proud papa.

Both Mom & little angel are fine. Getting a human life to dis world is surely d biggest miracle. Rawalpindi Express is now a Proud Papa!!!

Akhtar made us all go “awww” when he shared this super cute shot of his son in his arms.

The most prized catch my hands have ever, ever held on to….what a feeling!!!!! pic.twitter.com/L13wKxUn5y

Shoaib and Rubab tied the knot on 23rd June 2014. The popular pair even performed Hajj later in the year.

Don’t these two give us major relationship goals?