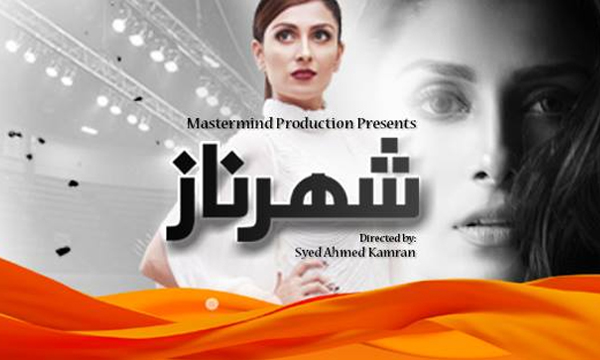 The stunning supermom, Ayeza Khan has wowed her fans with her killer looks and rocking performance in Urdu 1’s Tum Kon Piya. Now the starlet is all set to win the viewers all over again with  Urdu 1’s upcoming drama, “Shehrnaaz” to be aired in October 2016.

Guess who is the producer of the drama? It the starlet’s dear husband, Danish Taimoor.  Meanwhile, the drama’s directorial rein will be in control of Ahmed Kamran. Apparently, Khan’s new drama completely different than her old ventures. She will shed her usual desi girl avatars of the girl next door  and don the role of a gutsy girl who aspires to be an actress! Ayeza Khan has clearly revamped her looks for the Urdu1 drama and we are so excited to see her in the role of a diva! Pairing up with the starlet will be three male leads: Alyy Khan, Imran Ashraf, and Farhan Malhi. The drama will also cast Sajid Hasan as Ayeza’s father in the show.

Check out the BTS of the show below.

Don't ever let anyone dull your sparkle. Shehrnaaz. Produced by: Mastermind & Danish Taimoor Directed by: Ahmed Kamran Style by: @anilamurtaza

Shine like the whole universe is yours. Shehrnaz Produced by: Mastermind & Danish Taimoor Directed by: Ahmed Kamran Style by: @anilamurtaza

Blue is known as a 'sad' color, but when i see the ocean, all my sorrow is washed away. Shehrnaz. Produced by: Mastermind & Danish Taimoor Directed by: Ahmed Kamran Style by: @anilamurtaza

On the set of Shehernaz With The Great Sajid Sir.