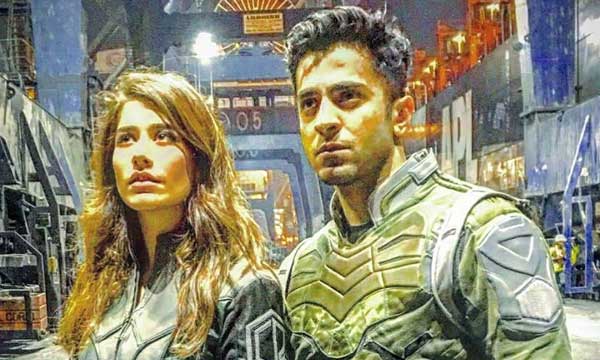 Pakistani cinemas will soon be raising curtains for the nation’s first ever superhero film, Ghazi featuring a star-studded cast of Humayun Saeed, Sheheryar Munawar & Syra Shahroz. The movie will be released sometime next year.

Both the leading males will be playing the role of superheroes.  Humayun’s character is named Salar,  Sheheryar’will be seen as Zain and Syra will play the role of Zara.

The starlet is all set to make her movie debut in the Pakistani movie industry. Her cameo role in the hit movie Ho Mann Jahan left us wanting for more of her on the silver screen.

After making his mark in Asim Raza’s Ho Mann Jahan, Sheheryar is preparing for the movie project Ghazi, marking the directorial debut of Nadir Shah who is primarily an ad filmmaker.

Meanwhile, Humayun Saeed has reaped quite a popularity with his last movie Jawani Phir Nahi Ani and shows no signs of slowing down by working in more potential projects.

A post shared by PAKISTANI CELEBRITIES🇵🇰 (@pakistani.celebrities) on Dec 23, 2016 at 8:56pm PST The movie’s story line will portray themes of love, loss, and patriotism. Other than the leading trio, the movie’s supporting cast also appears to be quite promising.

The veteran actor Talat Hussain will be essaying a multi dimensional role whereas Sheheryar’s mentor’s role will be played by none other than Humayun Saeed. The villain’s hat will be donned by Adnan Jaffar.

The shooting of the film is already completed 40% and  continues in the hill stations of Northern Pakistan. In response to the question whether the movie would paint over the Pakistani army in a positive light or incite hatred against India, he said that was not the case.

“Project Ghazi” is basically an action film, but has nothing to do with anti-terrorism and doesn’t campaign against India,” he further added, “As an artist, we have a social responsibility to reduce negativity and with Project Ghazi we are playing on metaphors, but have stayed away from controversies. There’s no point in adding hate.”

Check the BTS of the movie here.

The flip side of shooting nights is that you come home to this…. #projectghazi #cinema #action #film #heavenonearth

A post shared by Sheheryar Munawar Siddiqui (@sheheryarmunawar) on May 9, 2016 at 7:41pm PDT

All in a day's work… #projectghazi #film #stunts #action

A post shared by Sheheryar Munawar Siddiqui (@sheheryarmunawar) on May 7, 2016 at 5:49pm PDT

Hopefully, this movie will live up to its promise.