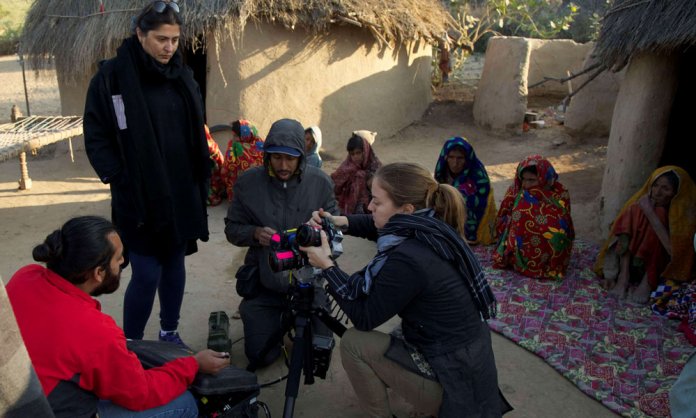 The 5-part documentary series is set to be premiered at the upcoming 55th New York Film Festival, the inaugural Tribeca TV Festival and the Future of Storytelling.

‘Look But With Love’ is a virtual reality documentary series about the extraordinary people of Pakistan who are changing the sociopolitical landscape of their communities through causes they are deeply passionate about. From a doctor in the slums of Karachi who has dedicated his life to providing free emergency care to children, to a courageous community of women in Nowshera, the epicenter of the terrorist insurgency, the series explores the lives of Pakistan’s most fearless and passionate citizens, one story at a time.

Indeed, this is the first Virtual Reality series by the two-time Academy Award winning filmmaker and her production company SOC Films, who joined hands with Chris Milk’s company WITHIN. The series travels from Karachi to Jamshoro and the Thar Desert to Lahore and Nowshera.

Audiences at the #NYFF55 will experience the first two episodes of this exciting project, A Story of Women and A Story of Dance at the annual program titled Convergence. The sixth edition of the program delves into the world of immersive storytelling via interactive experiences, featuring a virtual reality, augmented reality, live labs and demos, and more. At the #TribecaTVFestival from September 22 to 24, 2017 and #FoSTFest on October 4 and 5, 2017, a similar experience will be offered for the audiences. Sharmeen Obaid-Chinoy will be present at these festivals to talk about her work and share her experience working on Pakistan’s first Virtual Reality film series. On releasing Pakistan’s first ever Virtual Reality documentary series, Sharmeen Obaid-Chinoy said: “Virtual Reality as an experience is very immersive. I wanted audiences to interact with Pakistan in a completely different manner. In the series, I have focused on Pakistan’s unsung heroes… you will be able to literally walk in their shoes as they fight to save children in emergency hospitals and bring clean water to villages – finally a series where you can understand the spirit of the struggle of everyday heroes as they address Pakistan’s most pressing issues.”

Look But With Love is produced by SOC Films and Here Be Dragons, and will also be available on the WITHIN app.