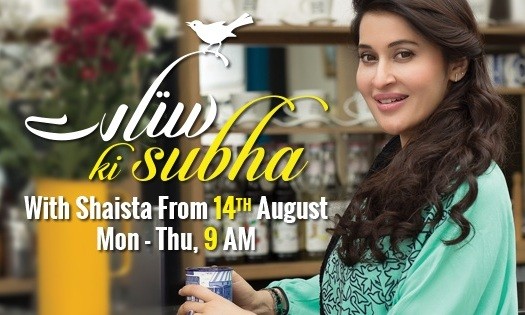 After a year break, the bona fide starlet of Pakistan’s Morning Show, Shaista Lodhi is returning to television with yet another morning transmission “Sitaray Ki Subah” on Hum Sitaray.

The show will have its grand launch on Independence Day and will feature some special guests.

The ex-host of Geo Entertainment’s Good Morning Pakistan disappeared from the face of television after she was charged in a blasphemy case. Eventually, she was then forced to leave the channel and the country due to safety concerns.

Read more: Shaista Lodhi is Back on Hum TV After Arrest Warrants

Almost two months ago, Shaista tied the know with her business man cousin Adnan and marked her homecoming by signing a contract with Hum TV.

Her new show “Sitaray Ki Subah” will feature on Hum Sitaray every Monday to Thursday at 9:00 PST.