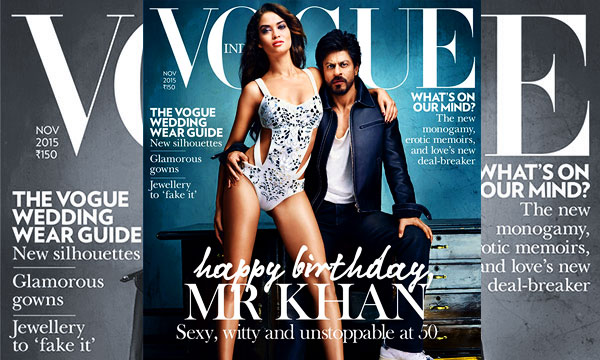 Fabulous at 50! SRK smoulders on the cover of Vogue India magazine. The timeless Shah Rukh Khan is hitting 50 this November and as a birthday treat to his fans, King Khan did a scintillating photoshoot for the Vogue India November Issue with Shanina Shaik by his side.

“Sexy, Witty and Unstoppable at 50” is how the magazine lauds the grandeur stature of King Khan and it describes it quite perfectly. Being 50, the man is still a complete blend of sexy, sleek and grunge. Here is the official cover of the magazine: With a dimpled smile and limpid eyes washed with thirst, the man is still a charm on-screen and this cover is proof enough. On the official cover, SRK is seen displaying his bearded avatar alongside the Australian model, Shanina Shaik.

The birthday special Vogue campaign has the evergreen King Khan stripping down and being sexy while posing for fiery photo spreads. We are sure he is ageing backwards. Watch the dazzling stills from the shoot below;

In the cover story, SRK makes a birthday resolution of doing three films a year and lets the fans in his life as a superstar, his ‘riven personality’ and the brashness that comes with being  ‘F****** international movie star’.

SRK took time off from shooting for ‘Dilwale’ in Hyderabad for the Vogue shoot with Shanina, who flew in from Australia.  The magazine has released a video showcasing behind the scenes of the sexy shoot. Let’s have a look;

Can you wait until #November? #SRKat50

Shah Rukh Khan will next be seen in Raees and Dilwale – much awaited and anticipated by Bollywood lovers. We wish our dearest superstar many advance wishes for his birthday!

What do you think of Shah Rukh Khan’s latest Vogue India Cover? Let us know in the comments below.