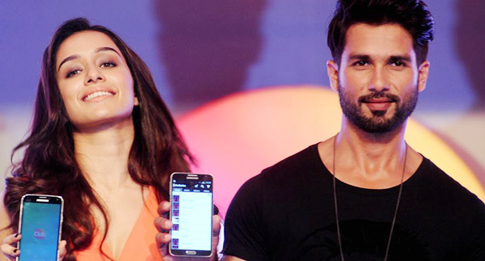 The renowned Bollywood star Shahid Kapoor has starred in the latest ad for Samsung India, which underlines the 4G data storing features of the novel Samsung Galaxy J series.

The entertaining advertisement aired on the television screens of India a few days back prior to the release of Shahid’s new movie ‘Shandaar’. The advertisement has also featured the rising star Vikrant Massey who has played the part of “Johnny”.

The advertisement stresses on the Samsung Galaxy J series being the “the real 4g phone.”

In the advertisement, Vikrant Massey as Johnny is watching a video while working out when Shahid Kapoor makes him watch the same video on Samsung Galaxy J phone which boasts an awe-inspiring result.

Shahid has added another feather to his cap by becoming part of the Samsung brand space saying; “I’m very happy to be a part of this association considering the fact that Aamir endorsed this product before me. It is prestigious and I’m excited because I haven’t been doing any commercials for a while now. I’m happy to start this journey again”.

The ad has received an immense positive response however some said that the advertisement was bereft of creativity since Shahid and Vikrant are extremely talented and the expectation were higher.