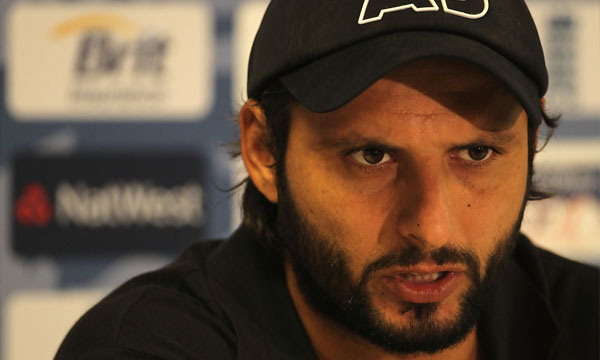 Former Pakistan captain Shahid Afridi said Thursday he hopes to force his way back into national contention and put the disastrous World Twenty20 behind him with a strong return to English club Hampshire this season.

The 36-year-old was not included in an ongoing boot camp ahead of Pakistan‘s tour of England that begins in July, with many pundits suggesting it was time for the flamboyant all-rounder to call time on his two-decade long career.

Afridi issued a video apology to the cricket-mad nation after Pakistan‘s exit at the group stages of the WorldT20, and his leadership style was slammed in separate leaked reports by then coach Waqar Younis and team manager Intikhab Alam — both since sacked.

“It was disappointing that people lied and tried to drag my name in the mud,” he told AFP, without directly referring to the leaks.

“They tried to save their positions and then I was subjected to a trial by media,” he added. “We played badly and lost but it was not correct to blame one man only. It was a collective failure.”

Afridi, who retired from one-day internationals last year and from Tests six years ago, said he was looking forward to returning to Hampshire for the first time since 2011.

“It will help me force my way back in the Pakistan Twenty20 team and I will always be ready to play for my country,” he said.

Once a leading light in the game’s shortest format who helped his country to their only WorldT20 win in 2009, Afridi’s form has slumped badly in recent times. He managed only 107 runs across his last 10 matches at an average of 13.4 — almost half of them coming from a 49 against Bangladesh.

His once sharp leg-bowling has also fallen away, managing seven wickets over the same period at an average of 36.0 and a best return of 2/27.

But he has enjoyed success for English clubs throughout his career. Turning out for Hampshire in 2011, he took 17 wickets in 10 matches and thumped 80 off 42 balls in the T20 semi-final defeat to Somerset, cementing his place as a fan favourite.

“I have played for Hampshire before and enjoyed the stint and I am going to have another blast this time around as well,” he insisted.

Pakistan are set to play four Tests, five one-day internationals and a Twenty20 on the tour of England. In September and October, they will host the West Indies in a series either in United Arab Emirates or Sri Lanka.