Home Sports Shahid Afridi Gets a Gift From Virat Kohli & Twitter Can Not...
Advertisement 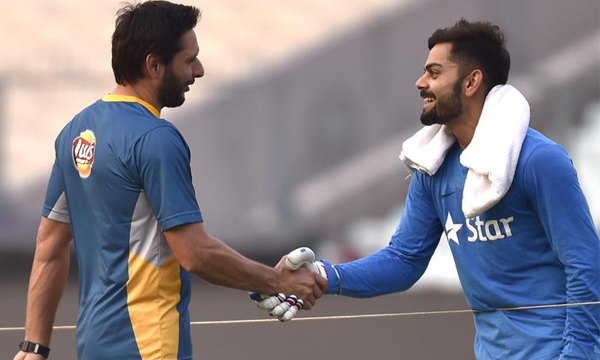 Shahid Afridi has forever been the favorite cricketer of every Pakistani. But who knew that even Indians have a soft spot for Lala?

Recently, the skipper declared his retirement from international cricket, an announcement that left many of his fans heartbroken! Now, he has received a farewell present from Virat Kohli and the rest of the players of the Indian team. We must admit that it was pretty sweet on their part.

So Kohli gave Boom Boom Afridi his own jersey, signed by him & the rest of the team!

Virat Kohli’s shirt, signed by Indian team, for Shahid Afridi, with a message “always a pleasure playing against you.” pic.twitter.com/KexlCjTNeZ

The shirt also sports a heart-warming message by the Blue-shirts:

To Shahid Bhai, it was always a pleasure playing against you

The picture was shared on Twitter by Pakistani journalist Faizan Lakhani.

I admire Kohli. It only he is great Batsmen but a great Human being and being aggressive in the field is his Class!!

@faizanlakhani good to see that players of both nations respect each other.

Seeing this made me genuinely happy! Its not the players but the politics that has sank one of the greatest sporting rivalry. #ShahidAfridi

@faizanlakhani Not a gr8 fan of kohli & Indian cricket but this made me to love them. It shows cricket is gentlemen game with no boundaries

With political tensions always brewing up between India and Pakistan, the team of the neighboring nation has risen above all the hate and displayed an example of good sportsmanship.

Let’s see what Afridi replies to the Indian team.

5 Educational Apps You Should Have On Your Phone Amid The...

All the Ways You Can Automate Through Mevris Switches