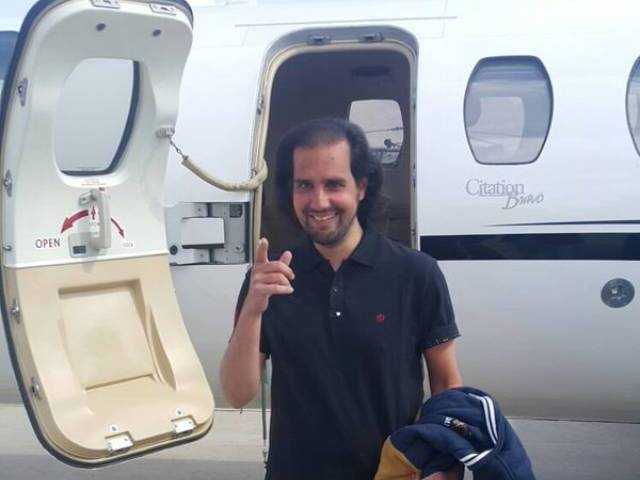 The kidnapped son of a slain Pakistani governor was reunited with his family on Wednesday after nearly five years in captivity, smiling for photographs with his mother after he was flown to his home city of Lahore.

Sporting a freshly-trimmed beard, Shahbaz Taseer appeared healthy as relatives greeted him at the airport just over a week after his father’s Islamist killer was hanged.

“We’re very, very, very happy and this is the start of a new life for us,” his sister Sanam Taseer told AFP over the phone. “It’s a beautiful day.”

Update:Shahbaz Taseer being flown home (Lahore) from Quetta in a special aircraft by int officials pic.twitter.com/ruoxPRxXa0

On Tuesday authorities announced that, acting on a tip-off, they raided a compound in the Kuchlak district of restive southwestern Balochistan province, where they found Taseer alone. It was not immediately clear when the raid took place.

However the owner of a roadside restaurant in Kuchlak told reporters that Taseer was recovered after he came to his restaurant on foot Tuesday evening.

There he ordered food then made a phone call, and personnel from paramilitary group the Frontier Corps came and picked him up.

Taseer had been abducted by Islamist gunmen from the city of Lahore in August 2011, months after his father was killed for opposing the country’s controversial blasphemy laws.

Shahbaz Taseer flown to Lahore, lands and reunites with his family pic.twitter.com/eLkgDJRXSn

The governor’s assassin, Mumtaz Qadri, was hanged on February 29 in what analysts described as a “key moment” in Pakistan‘s long battle with extremism.

The execution, together with Shahbaz’s release, have come as welcome news toPakistan‘s long beleaguered liberals who have grown more accustomed to attacks since an Islamist insurgency rose up against the state more than a decade ago.

During his custody, Taseer was moved between locations in the tribal areas and militant outfits, according to multiple rebel commanders.

A Taliban commander in the country’s northwest told AFP late Tuesday that Taseer was initially abducted by the Lashkar-e-Jhangvi sectarian group that is mainly based out of Punjab, which handed him over to the Pakistani Taliban.

“Militants from Lashkar-e-Jhangvi picked him up and then he was handed over to TTP,” the commander said.

Taseer spent most of his time with TTP fighters who kept him in separate locations in North and South Waziristan, and in areas close to the Afghan border, he added.

Two other militant commanders said he was later handed over to the Islamic Movement of Uzbekistan which maintains close ties to Al-Qaeda.

The militant sources said Taseer was treated well and played sports with his captors.

“Taseer liked to play cricket and so militants had provided him a bat and ball which he was playing with militants,” one commander told AFP.