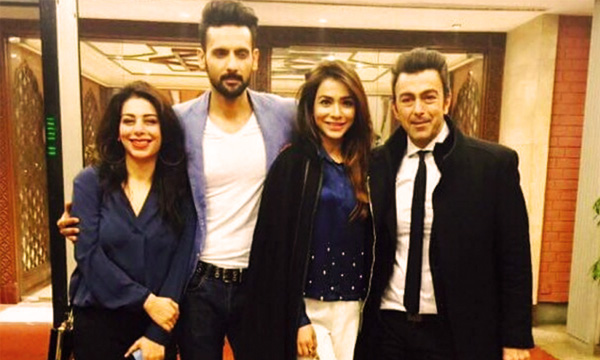 Shaan does something and it doesn’t get into the limelight? not possible! Recently, he has been getting attention for his directorial comeback with the remake of Arth2. Yesterday, a press conference was held in Lahore to announce the collaboration of Telenor EasyPaisa and the movie, Arth 2.

The event was attended by the lead cast of the movie that includes: Humaima Malik, Mohib Mirza, and Uzma Khan. They all seemed to exude a strong bond.

The movie is the remake of Mahesh Bhatt’s 1982 release – Arth. The film is being produced by HKC Entertainment, AAA Motion Pictures, and Shaan’s very own production house 5th Element.

In the press conference, Humaima, Mohib, and Shaan took turns to say a few words regarding the movie; yet, we did not get to hear much about the movie’s plot. However, Shaan did shed some light on the change of the movie’s lead cast.

Previously, Humayun Saeed was in the lead, who has just recently been replaced by Mohib Mirza. Shaan made quite a controversial statement about this change stating that:

“The only reason why Humayun Saeed was a part of #Arth2 was because ARY was involved with the film and they were pushing for him, As soon as ARY left, Mohib came on board as was my initial plan for the film” reported Galaxy Lollywood.

As far as the movie and its script is concerned, Shaan said:

“It is going to be a complete commercial film with a great script at its core and it would be synonymous with an art movie.”

Mohib Mirza and Humaima Malik also came on the podium to express their opinions and were all praises about their director Shaan. In the press conference, a video message of Mahesh Bhatt was also shown wishing the team all the luck for the remake of his hit Bollywood flick.

Arth 2 is slated to be released in 2016. What do you think about the statement that Shaan made in the press conference about Humayun Saeed’s  replacement?  Comment and let us know.