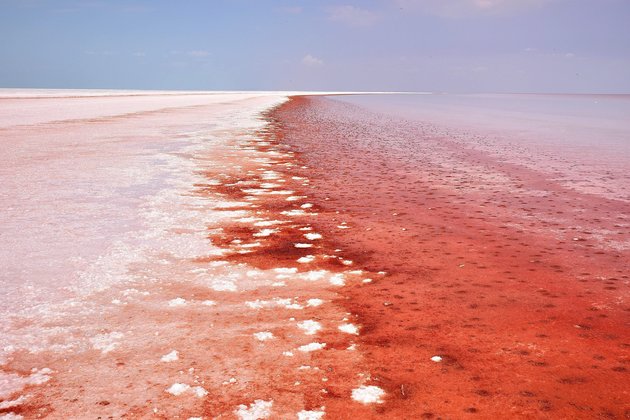 No, it is surely not the Red Sea but a saline Lake in Turkey that has strangely turned red! But what is the mystery behind this bizarre blood-red transformation of the lake?

Apparently, it is the blooming of the Dunaliella salinas algae especially found in sea salt fields that has turned the second largest salt lake of Turkey; Tuz Golu in to a shade of red ruby. According to reports the algae tends to be harmless and changes the lake seasonally into a pool of crimson. The alteration is not due to any ecological disaster but is actually a result of evaporation leading to a rise in the salt level. This eventually destroys the plankton in the lake who feed on the algae, enormously multiplying the number of the organism and turning the lake red. Stretching around 600 square miles, the Turkish Tuz Golu Lake is widely known as a key source for salt production which accounts for 63 % of the total production. It also serves as a breeding ground for birds like flamingos, drakes, swamp swallows, white-fronted goose, lesser kestrel and gulls. What’s more, it is the algae that contributes to the beauty of the pink flamingos, as it is rich in red beta carotene which in turns bring out the pink in the birds.