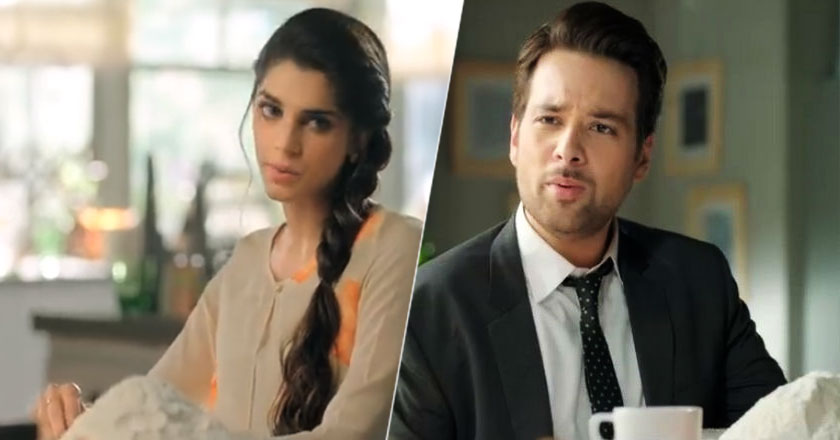 Yet again, Ufone has managed to uphold the legacy of making advertisements that a large chunk of Pakistani public just could not help loving.

Now that the teleco giant can no more get its hands on the jailed Ayyan Ali, the brand seemingly made a smart move by roping in the popular model and actress Sanam Saeed to star alongside Ufone’s ever-faithful “Meekal Zulfiqar”.

Conceived by Tadpole Films and directed by Ahsan Rahim, the advert has gone viral on social media in no time, receiving a whopping number of more than 6000 shares on Facebook till date.

The credit apparently goes to Sanam Saeed, who reduced the audience to fits of laughter with her stellar performance in the ad.

Consequently, the TVC will make you wonder if there is anything Saeed can not do!

From the bitter friend in Daam to the dignified divorcee in Shukk, the independent Kashaf of Zindiagi Gulzar hai to the possessive wife in Diyar-e-Dil; she has flawlessly donned an array of versatile roles.

Who knew she will be next seen playing “Kung Fu” in Ufone’s latest “Hisaab do” TVC?

The power-packed, bone-tickling one-minute ad features the husband-wife duo of Saeed and Zulfiqar.

But just within a span of fourteens seconds, Sanam transforms from a humble and submissive wife to a ferocious tiger who pounds on her husband, beating him into a pulp for demanding the account of money.

The best part was the “fry-pan” smash by Sanam, straight on Meekal’s face, reminding us of “Po” who does a similar move in the movie “Kung Fu Panda”.

Last year, Ufone launched its Hisaab Do service as a response to blatant attacks and controversies of the brand deducting hidden charges from its users.

Guaranteeing honesty and transparency in billing, the Hisaab Do service ensures daily information of cost deductions to its subscribers, free of cost.

Previously, the first installment of “Hisaab Do” TVC series also made waves over social media for knocking down Telenor‘s accusation, that Ufone is being deceptive towards it customers.

Now once more, Ufone emerged as the trendsetter by winning over the internet with its latest ad, giving us a refreshing break from the usual dance-centric ads, topped with nonsensical jingles.

Read the loving Twitterati reviews for the Meekal and Sanam starrer Ufone TVC.

The new #Ufone ad is pretty good. Ufone definitely makes one of the best ads in #Pakistan.

#Ufone commercial starring Sanam n Mikaal is a hoot! ?? But it really makes me scare to dead to see that Wifezilla ?????? pic.twitter.com/EOJIqXnmjH

Kudos to the brilliant team behind the hilarious new #Ufone ad, maza aagaya!

The response to the new Ufone ad is a slap in the face of all those who blame TRPs for the content on Pakistani television.

However, few seemed to have issues with Ufone’s satirical storyline in the ad.

I Don’t like #Ufone new hisab TVC. What if it’s made vice versa? https://t.co/3Hkwq5myYO

Critics have expressed sarcasm over the advert for mocking men and promoting domestic violence against them.

What do you think of the latest Ufone TVC. Share with us in the comments below