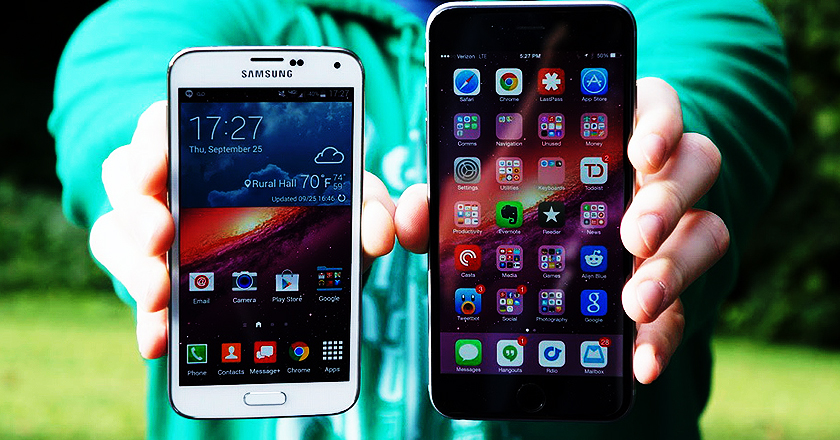 The two twins are nearly identical, barring the obvious difference of the curved screen on the S6 Edge, each having a sleek metal design and lots of glass.

Some of the new Galaxy S6 features include upscale metal design and the updated fingerprint scanner. However, once the release was made, it was evident that the Samsung Galaxy S6 was alarmingly similar to the Apple iPhone 6.

Here we look at the specifications of the Samsung Galaxy S6 versus some of its main competitors in the smartphone market.

Samsung has put design first and features second with the Samsung Galaxy S6. Getting rid of the plastic skin, and making the transition to metal and Corning Gorilla Glass 4, the S6 is plastic-free. However, there is no waterproofing, no removable battery, and no microSD card slots. The Galaxy S6 Edge has a sleek, curved glass across a metal frame.

The iPhone 6 sports a rounded and curved shape in addition to a slim frame. The phone has a premium feel due to the presence of glass and aluminum materials.

The Samsung Galaxy S6 and Galaxy S6 Edge boast 5.1-inch SuperAMOLED screens, with 2K 2560×1440-pixel resolution, making them smartphones with the highest pixel density at 576ppi. The colors and display are significantly sharper than their predecessor.

The Apple iPhone 6 has a 4.7-inch LED-backlit IPS display, with 1334×750-pixel resolution at 326ppi, which fails to flatter because it is not completely HD.

The Galaxy S6 and Galaxy S6 Edge feature a superb 16MP, f1.9 rear cameras, with optical image stabilization, and a 5MP front camera, made exclusively for selfies which lets in 60% more light as compared to other frontal cameras. The camera app takes photos in less than one second, which is also an upgrade.

The iPhone 6 supports an 8 MP rear camera, which is widely being considered among the best smartphone cameras in the market. The frontal camera is a seemingly meager 1.2MP, which does take clear selfies.

The new Galaxy S6 and Galaxy S6 Edge are powered by the new 2.1GHz Octa-core Exynos 7420 processor, and have a 3 GB RAM. The internal storage comes in 32, 64 and 128 GB variants because of an absence of microSD card slots. The phone has a 2,550mAh battery (2600mAh for S6 Edge), with the addition of a fingerprint sensor and heart rate monitor.

The A8 chip powers the Apple iPhone 6, and features 64-bit architecture. The chip has a dual-core processor, with 1GB RAM and an 1810mAh battery. The iPhone 6 also features an integrated fingerprint sensor.

Samsung has given its software a major boost with the release of the Galaxy S6 and Galaxy S6 Edge. The Android 5.0-based TouchWiz UI will allow the phones to become more responsive and cleaner. The stock phone includes very few preinstalled Samsung apps, while the UI shows the influence of Material Design.

iPhone 6 Plus comes with iOS 8, the latest edition of the OS. iOS 8 is very similar to iOS 7, but includes a few changes that can be pointed out after critical operation of the phone.

Which phone do you like best? Do you think the new Samsung phones will be successful? Tell us what you think in the comments below.