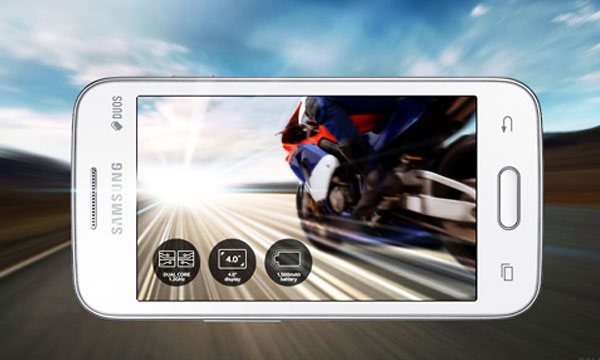 Always ahead of its competitors, Samsung never fails to surprise. It has recently announced to launch Galaxy V Plus- a new starter-range smartphone.

Earlier QMobile paired up with Google to launch first Android One phone and seems like Samsung is playing the game very well to be a part of this fierce smartphone battle.

Galaxy V plus is the successor to previous year’s Galaxy V with a price of just $82- a perfect blend of affordability and technology.

The phone specs and features include a 4-inch display of TFT LCD panel with WVGA (800 x 480) resolution. The exterior design follows the signature design of Samsung. It has a Dual SIM support that is defaults and every phone will have two slots for the micro-SIM.

The phone’s internal include a dual-core processor of 1.2 GHz, a 512 MB RAM and an internal storage of 4GB, out of which the usable storage will be of 2GB. The phone also contains an option to extend the storage through microSD card slot.

Also see: QMobile A1: Pakistan’s First Ever Android One Smartphone to be Launched

Galaxy V plus comes with a 3 mega-pixel camera with 480p video recording at 30fps.  Good news for the Selfie lovers, the phone also has a front shooter which comes with a 480p camera. Other features include3G, Wi-Fi and Bluetooth 4.0 for connectivity.  The battery of the phone is a 1,500 mAh.

Running on Android 4.4 KitKat out of the box (and Touch Wiz on top of it), this excellent piece of technology, is available in two colors: Black and White. It is one of the most affordable phones Samsung has ever come up and that too with such good features.

The battle doesn’t end here; Samsung will have to face a tough competition from Microsoft Lumia and other Chinese brands that are offering smartphones at affordable prices.