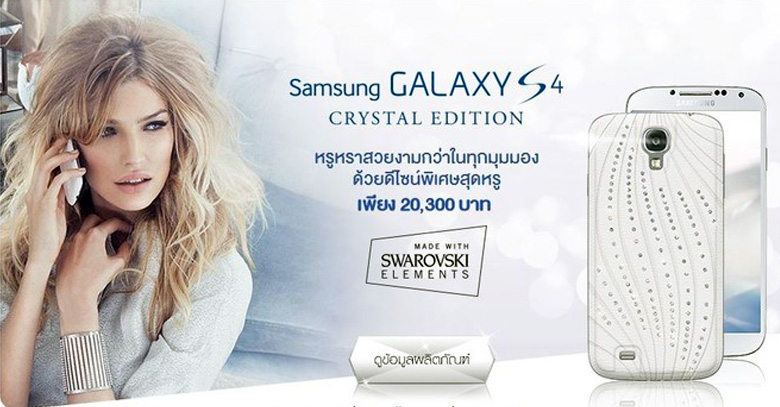 In an attempt by a Thai flagship of the company to give the cellphone a Swarovski makeover, the manufacturers have added a white faux leather rear casing embellished with Swarovski crystals to the signature smartphone.

Keeping the exclusivity in mind, the phone is only limited to Thailand and only 3500 consumers would be able to add this starry piece to their lifestyle. As of now, the 2013 flagship smartphone variant is only available via Samsung Thailand and has been priced at 20,300 Thai bahts, i.e. approximately $650.

Launched globally in March this year, the device sports a 5-inch full-HD display with a resolution of 1080×1920 pixels, and pixel density of 441ppi. It is powered by 1.6GHz Exynos octa-core processor alongside 2GB of RAM and runs Android 4.2.2 Jelly Bean. The Galaxy S4 sports a 13-megapixels rear shooter and a 2-megapixel one on the front.

Keeping in mind the fact that Samsung Galaxy S4 stands as the 2nd most selling handset after iPhone, this enhancement will surely create the desired curiosity among the smartphone fans.