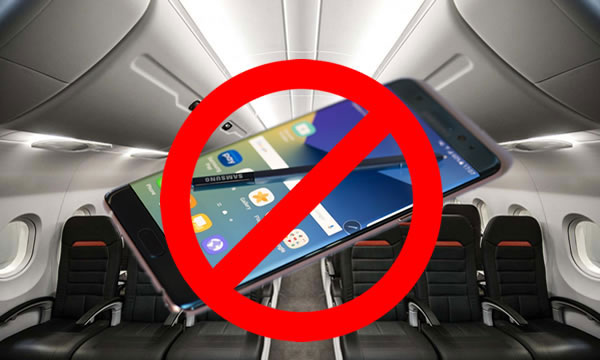 Update: After the chaotic battery scenarios which came forth recently, involving exploding incidents, international and local airlines have decided to ban Samsung Galaxy Note 7. This decision was followed by over 35 official cases which came forward about the battery of the smartphone catching fire.

Despite Samsung’s halt on the shippings to investigate what went wrong, names like Emirates, PIA, Thai, Etihad Airways, Singapore Airlines, Australia’s Qantas, Virgin Australia and others. WAM news agency official had stated; “The General Civil Aviation Authority has banned operating, charging and carrying in bags the Samsung Note 7 on board national carriers’ flights. This measure is to avoid the possibility of these devices’ batteries causing fires.” The Federal Aviation Administration gave the following statement; “passengers not to turn on or charge these devices on board aircraft and not to stow them in any checked baggage.”

Whereas Pakistan International Airlines (PIA) stated, “In view of recent reports about Samsung Galaxy Note 7 devices, and the international warnings to airline passengers not to carry this smartphone during flights, PIA passengers are also strongly advised not to carry it, not even in their check-in luggage, as it may compromise aircraft and passenger safety.” Samsung Pakistan also delayed the launch date of Note 7 in Pakistan and halted the pre-orders.

Samsung Galaxy Note 7 was the most awaited phone of the year, because of the amazing specs, quality, looks, and so much more, Samsung has decided to recall their flagship. Unfortunately for the company, reports of the Note 7 flaming up and concerns about the flagship’s battery have surfaced. Because of the massive amounts of negativity is influencing the phone.

Because of the massive amounts of negativity is influencing the phone, the company will do this on an international scale. Up to now, 35 incidents have taken place where the battery catches fire while the phone is charging. To this, Samsung made a statement, 2nd September, saying that the company will halt all shipments and will conduct further hardware tests to figure out what is going wrong. The company is looking into the matter because the launch of the Samsung Galaxy Note 7 flagship in countries like the UK is yet to take place. Even users in India, who had pre-ordered the set received messages that the shipments of the phones will be delayed.

The main reason for the hardware issues and the exploding batteries can be the rechargeable battery, which is used in other gadgets like hoverboards, and incidents of them catching fire due to over-charging and other reasons also surfaced not long ago.

Samsung mentioned in their statement that it will take 2 weeks to replace the phones which have gone all out, however, it’s unsure if the company meant this for its global audience or local as for now.