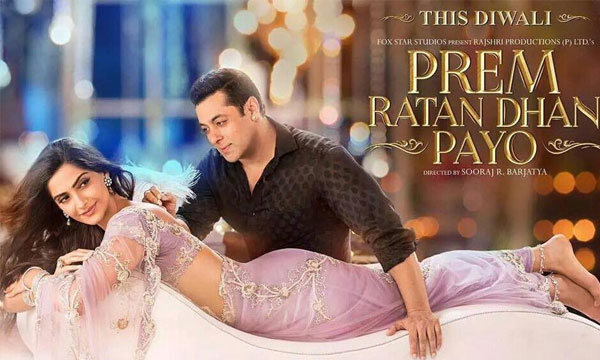 After taking over Bollywood with his box-office blockbuster Bajrangi Bhaijaan, Salman Khan returns this year with yet another hit-in-the-making, Prem Ratan Dhan Payo. The first look of the movie has been finally unveiled by the superstar on Twitter.

Here is the recently revealed trailer:

Here is the recently revealed official poster of the movie: The much-awaited poster of the Sooraj Barjatya movie features the Dabang hero clad in cobalt blue kurta over a white dhoti.  However, the sneak peak only reveals the star facing his back towards his fans.

Check the poster as shared by Salman Khan here.

Returning as the beloved Prem yet again after Maine Pyar Kiya, Hum Aapke Hain Koun and Hum Saath Saath Hain, Khan has paired up with the bubbly Sonam Kapoor who is the leading lady in the movie.

The trailer of Prem Ratan Dhan Payo will be out on October 1st and has been slated for a Diwali release.