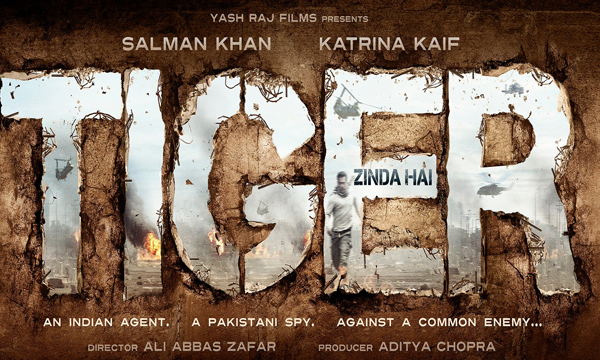 Salman Khan is on a roll with back-to- back movies in Bollywood! While he is currently shooting Kabir Khan’s Tubelight and has also signed Dabangg 2 as well as Kick 2, the actor is all set for Tiger Zinda Hai with the sultry starlet Katrina Kaif!

The movie’s first poster has been released and announces the release date to be Christmas 2017.

The sequel to Khan’s 2012 mega hit ‘Ek ThaTiger, the  movie will be directed by Sultan’s director Ali Abbas Zafar and will be penned by Aditya Chopra.

All those who saw the first installment will know that the movie had an open ending and left the audience craving for more. The plot wrapped up with Salman Khan as Tiger and Katrina Kaif as Zoya disappearing from the radar of the RAW and the ISI. Salman Khan fans went crazy over the breaking news and took to Twitter to express their glee!

#TigerZindaHai @yrf The combo of @BeingSalmanKhan & @kabirkhankk will be the best choice for this film! Plz ask @kabirkhankk to direct it!🙏

Chalo finally #TigerZindaHai. After completing #Tubelight, another 300 Crore movie will be produced.