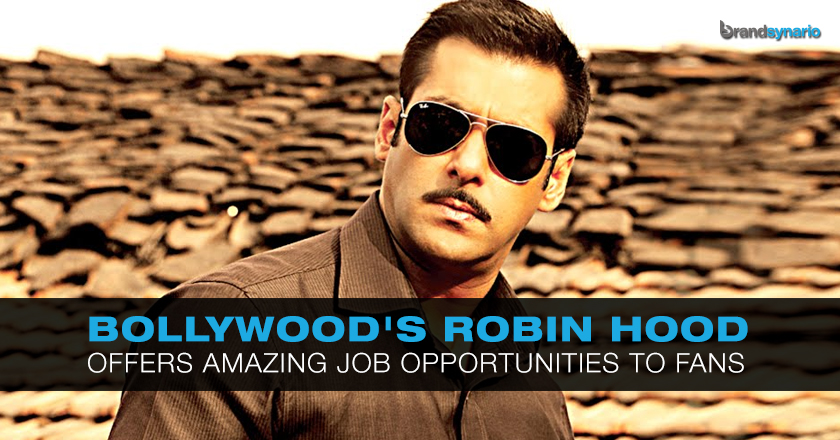 Bollywood’s Robin Hood – Salman Khan is all set to help the unemployed this time!

Salman khan is generally known as the Godfather of Bollywood, he is always there when it’s time to save a friend tumbling career or help a Johnny-come-lately.

Point of the matter being- despite of having his hands full with loads of b-town’s happenings, a wedding to plan, shooting and all, when the stranded calls the savior is all ready to help.

This time around, Salman has taken his big-heartedness to a whole new level his time.

Seemingly, loads of Salman’s fans reached the star with countless ‘job requests’ and ergo! The savior, who got distressed by the unemployment rate amongst his fans, decided to help them out and tweeted that, “everyone on my FB who are jobless, I’ve talked to my friends and they’ll be glad to hire you- if you qualify for the job. Lots of my fans have been saying that they aren’t employed, so I thought about it, if it works and you get jobs. Would be really happy for all of you.”

Lots of fans hv been saying that they don’t hv any job , so thought of this , superb if it works n u get jobs . Vil b v happy for u all .

Later he added that these jobs aren’t anywhere near or around me, you’ll be working with the companies i’ve worked with or just friends helping out you and me.

Appna Face book is not jst for time pass, use it to find work. http://t.co/iiif0r0x3j #Beinghumanjobs. Kaam ki cheez.

This link redirects you to another portal where different jobs from companies like PVR, Venkys, Mandhana and Suzuki are posted.

As far as the outcome is concerned, the portal crashed the moment Salman Khan posted this link on his Twitter account.

The high traffic of job-seekers crashed the star’s Facebook page. Apparently, this got the star all worried and is working on getting it fixed.