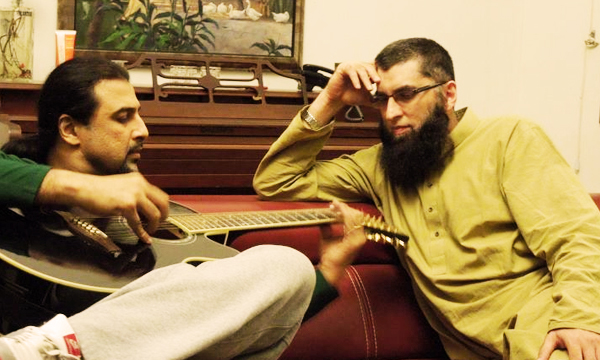 Famous composer, singer, and songwriter, Salman Ahmad will be releasing the video of the latest song, on December 16th, 2016. According to Salman Ahmad, the video will pay homage to the late national icon Junaid Jamshed. The video will also feature former Pakistan cricket captain, Wasim Akram and wife Shaniera. Here are some exclusive shots from the video ‘Door Buhat Door’ Exactly one year back, Junaid Jamshed and Salman Ahmad teamed up to release the song ‘Chand Sitara’ on Independence day 2015, to pay tribute to the December 16 Army Public School Peshawar Massacre victims and casualties caused by the global terrorism threats. Junaid Jamshed, who had long abandoned singing, desperately wanted to do something for the innocent who had died a tragic death and what better way than to pay tribute to them in this special way!

Like Chaand Sitara, this track too will be something we will cherish forever. We can’t wait for ‘Door Buhat Door’ to be out!