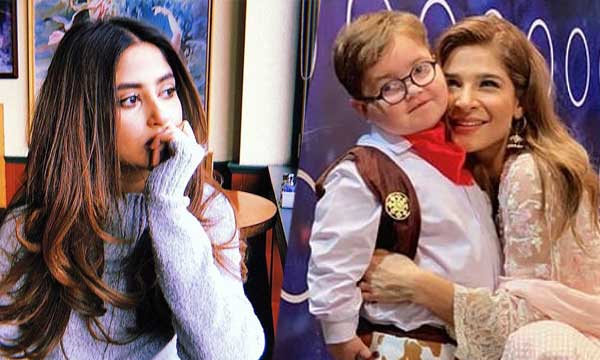 The latest internet sensation Ahmed Shah has taken social media by storm because of his cuteness and adorable antics.

His fanbase has multiplied by manifolds and he has left the whole nation gushing over him every time he appears in any TV program.

However, there are a number of celebrities who are expressing their concerns over his constant presence at live transmissions and exploiting him.

Recently, a famous Pakistani Youtuber Arslan Naseer released a video where he talked about commercializing Ahmed Shah just for the ratings of channels.

He also explained that such an attitude shouldn’t be appreciated as it will only encourage him to be more aggressive.

As soon as the video was released, it caught the attention of the Yakeen Ka Safar actress Sajal Aly where she agreed to him.

The starlet took to her Instagram stories and wrote:

Guys watch this video and WAKE UP. Thankyou for making this video @arshalan.naseer.cba

Moreover, a number of netizens are also raising their voices over this issue and saying that his health shouldn’t be compromised for money.

Have a look at what people have to say!

Exact thing I was talking about an hour ago with my friend.

But somehow this is bad with this kid.

Where's woke and anti harrasment crowd, Ahmed SHAH being used for giving chumis to Fahad Mustafa and his guests!

# Justice for that Cutiepie

exploiting the cuteness of #AhmedShah & displaying his expression as showpiece to earn ratings is beyond sense. His childhood, his privacy & his reputation are all going to be affected for life.#ARYDigital