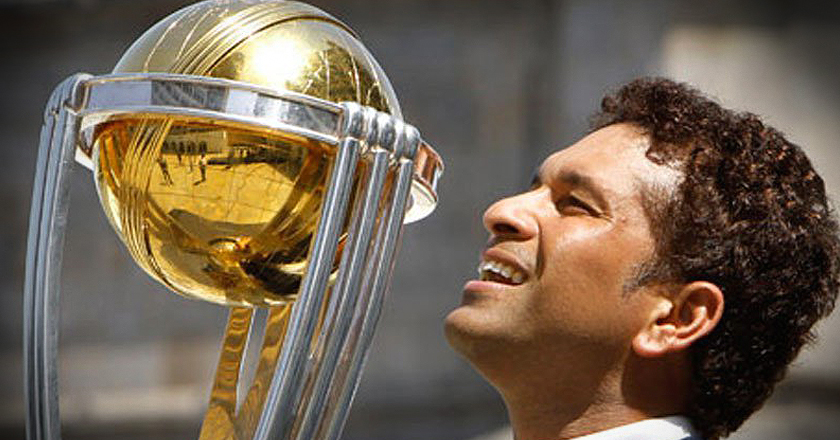 Sachin has been once again nominated as the official ambassador for ICC World Cup 2015.

This is the second time in a row that the Indian legend has been honoured with the precious title of ICC World Cup Ambassador. The previous ICC World Cup 2011, co-hosted by India, Sri Lanka and Bangladesh back in 2011 also saw Tendulkar as the official ambassador.

ICC World Cup which is the third biggest sporting event of the world will be taking place next year from Feb 14 till March 29 in Australia and New Zealand.

Tendulkar being the ambassador will be promoting and supporting a lot of initiatives to enhance the tournament’s profile.

After representing his country in 200 tests, 1 twenty20 international and 463 One-Day Internationals, the legendary Tendulkar retired from cricket last year. The sports star has a history of the most runs in the World Cup history, i.e. 2,278 runs in 45 matches played, which is an average of 56.95 run rate.

In 2003, Sachin made history when he scored 673 runs in the ICC World Cup, for which he was awarded ‘player of the tournament’.

While accepting the ambassadorship for ICC World Cup 2015, Sachin commented,

“I am delighted and honored to be appointed ICC Cricket World Cup Ambassador for the second successive time.” He further added, “After playing in the last six editions, the upcoming World Cup will be a different experience as I will follow it from the sidelines. It could probably be comparable to the ICC Cricket World Cup 1987 where I was a ball boy, enthusiastically cheering every ball.”

The ICC Chief Executive David Richardson, honored the legendary player in the following words with ICC ambassadorship once again,

“The ICC is delighted to once again have Sachin as an Ambassador for its biggest and most prestigious tournament. Sachin is not only an inspiration to cricketers but to all sportspeople for his endurance, perseverance, talent, personality and commitment to the game.”

ICC World Cup’s 11th edition will kick off at Christchurch, New Zealand where the home team will take on the defending champion Sri Lanka. A total of 49 matches will be played during ICC World Cup 2015 on 14 different venues, i.e. seven venues in New Zealand and seven in Australia.

The teams that will be taking part in 11th edition of the world cup will be the 10 full members and four new qualifiers including Afghanistan, Scotland, United Arab Emirates and Ireland.