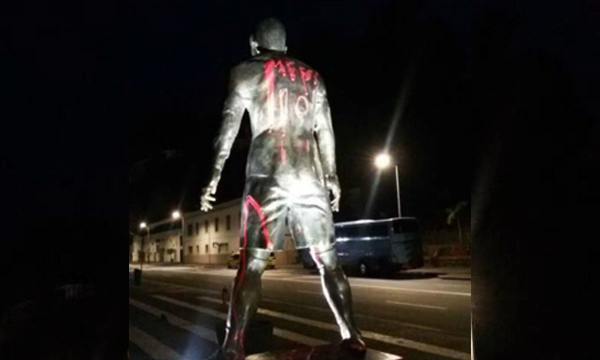 Just hours after winning the fifth world player of the year award, Cristiano Ronaldo’s statue in Funchal, the capital of his home island, Madeira was scrawled with the graffiti containing the name and shirt number of Lionel Messi.

According to the local press reports, the graffiti on the statue was marked overnight on Tuesday, after the news came out that Barcelona’s Argentine star Messi has bagged the fifth world player award of the year.

As claimed by Diario de Noticias Madeira, the graffiti was covered with Messi’s name and shirt number-10 in a spiking red color.

The Diario de Noticias da Madeira said, “the name Messi and his shirt number 10, scrawled in red was already cleaned off the statue”.

On the other hand, Ronaldo’s sister Katia Aveiro while commenting on the act on social media said, “It’s a shameful act committed out of jealousy towards him.”

It is pertinent to know that Messi defeated Real Madrid Portuguese striker and three times Ballon d’Or winner Ronaldo, after which he was awarded the recognized fame.

Ronaldo had unveiled the 3.40-metre-high bronze statues of himself on the Funchal seafront in December 2014, a few hundred metres from the museum that he self-financed.