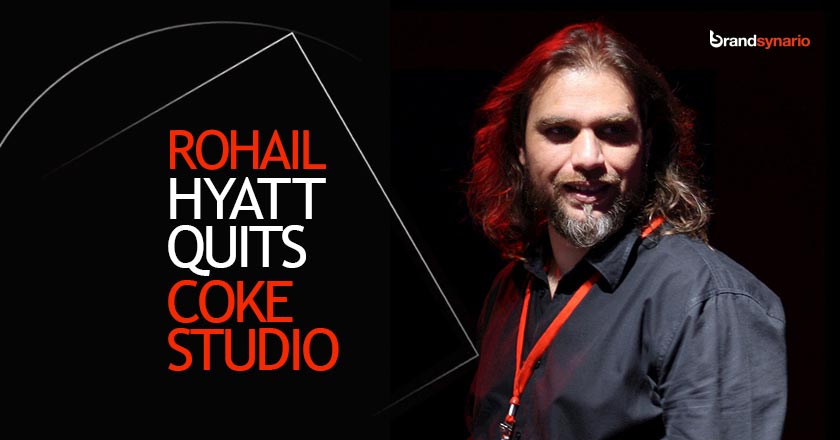 The long rumor of Rohail Hyatt leaving Coke Studio has finally been confirmed by the man himself as he left millions of Coke Studio fans in sorrow Wednesday 22nd January with only a note, saying his goodbye to his own show, which now stands as Asia’s biggest music show till date.

Music fans had predicted Rohail’s departure from the show long before it happened today, as the falling popularity of the show forced an abrupt ending to the season 6 in its fifth episode.

Many conspiracies emerged for the bad reviews of the sixth edition of Coke Studio, some blamed it on the franchise’ move to take the show International, while others held the musicians and the ambiance responsible for the demise of Coke Studio.

Whatever the reason maybe, Rohail Hyatt unanimously remained responsible for the weakening position of Coke Studio.

This gave birth to many conspiracy theories, one suggested that Coca Cola marketing had major issues with Hyatt’s methods of promoting and branding Coke Studio, another theory claimed that Coke had approached Strings to substitute Hyatt as the producer of the show as early as March 2013.

Sources close to Coke Studio also claims that Season 6 had at least 8 episodes planned in the pipeline when Hyatt abruptly left the country after 5th episode without any word of coming back – this instigated Episode 5 to be the inadvertent Season Finale.

Whatever the truth in these conspires be – there is no denying that Rohail Hyatt is the man who has made Coke Studio what it is today. India along with many other countries could not only stand in awe as the genius of the man took Coke Studio Pakistan in the league of the world’s best Live music ever produced under one roof.

The man himself, Rohail Hyatt, left his grieving fans with these final words on the official Coke Studio platform:

“Dear friends, I wish to thank you all for the love and support you have shared with me over the years. As the producer of Coke Studio in Pakistan, I have had the privilege to work with some of the finest talent and interact with a vast number of people who have shared their thoughts and gratitude over the years. It has been quite a journey. From the 1st season when we had absolutely no clue as to what we were doing to the 6th season when we still had no clue as to what we were doing..  This is what made this journey so wonderful – not knowing. At the end of the day, what made the experience memorable is the amazing response the listeners and audience of Coke Studio gave to the work. With 3 million Facebook fans, 100 million views on YouTube and 13 million views for season 6 on Vimeo, I feel very content and I cannot thank you enough for the love, appreciation and criticism you have showered on the offerings. Thank you!

As of late, there seem to be rumours flying around that I will not be producing the next season of Coke Studio in Pakistan. This is true. I’m changing course for personal reasons. But my journey of exploring the depths of our heritage and sharing it with the world will continue.. No, there has been no sudden end to the relationship between Coke and I and nor is there a conspiracy against me as some people are reporting. I simply opted out of producing season 7 for personal reasons..

I wish the new producers of Coke Studio well. They are an amazing team and I’m sure they will do justice to the platform. They have my full support and blessing. Good luck to them!”