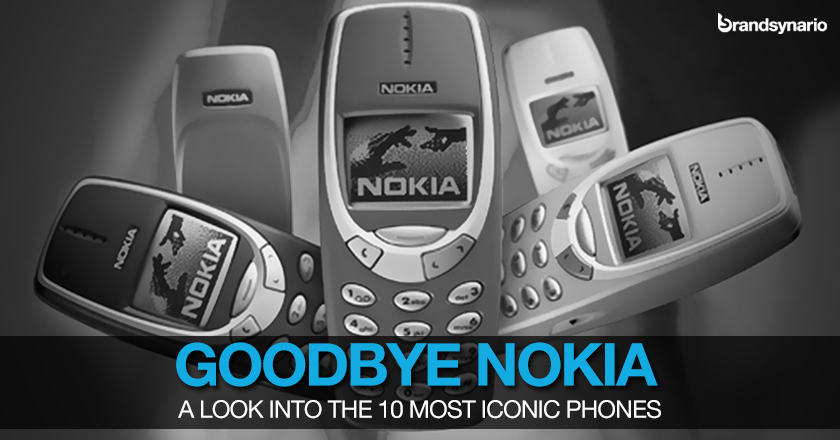 After Microsoft completed the acquisition of Finnish mobile company, Nokia, in April 2014, for an estimated $7.2billion, it soon became apparent that the famous Nokia brand name would no longer appear on its mobile phones. The last phones to bear the Nokia name will be the Nokia Lumia 730 and Nokia Lumia 830, spelling the end of an era that helped change mobile technology history and changed the average user’s expectations from their handheld devices!

Here we take a look at 10 of the most iconic mobile phones produced by Nokia during its glory days, some of which completely changed the mobile phone industry forever.

Nokia 6110 was one of the first Nokia phones to feature the now-famous Nokia ringtone, and was the phone that popularized the ‘Snake’ game.

Nokia’s take on a business-oriented phone, with a mechanical slider, the Nokia 8110 was made popular by its extensive use in the 1999 blockbuster movie, The Matrix.

Complete with a QWERTY keyboard, a 4.5-inch screen, and a 24MHz processor, the Nokia Communicator 9000 came as a surprise to many users. The Communicator was the first phone ever made for business users. Needless to say, it was every businessman’s dream!

Perhaps the most popular phone ever produced by Nokia, the Nokia 3310 combined increased usability and affordability and sold more than 125 million sets worldwide, reaching unprecedented, legendary status as a result.

The first Nokia phone to run Symbian, an OS that was to be used to run all of Nokia’s smartphones, the Nokia 7650 was also the first phone to feature a camera.

A phone that was made purely for gaming purposes, the N-gage series was a direct attack on the Nintendo Gameboy devices.

One of the most beautifully crafted mobile phones ever made by Nokia, the N95 was the phone that came with all the features that made it the ‘phone to beat’ for Apple’s iPhone. It came with a brilliant 5MP camera, equipped with the Carl-Zeiss lens, a movie player, a music player, and a lot more, the N95 had everything that made it one of the most brilliant phones ever created by Nokia.

One of the most elegantly designed phones of the Nokia E-series; the E71 was a business smartphone that rivaled Blackberry phones for quite some time upon its release. It featured Wi-fi and 3G networks and a 3.2MP camera.

Do you think we missed out on a phone? Which of the phones did you own? Have your say in the comments below.