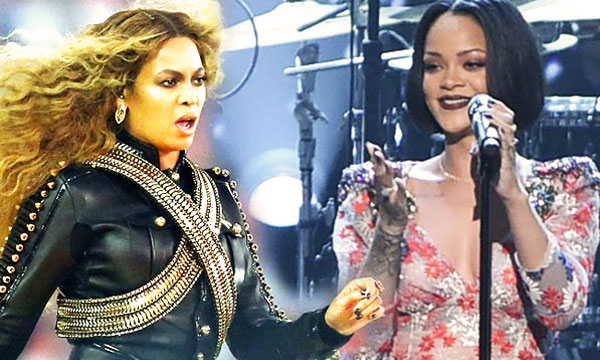 Beyonce sang that girls “run the world” but she is not alone in ruling Spotify, where Rihanna is giving her a strong challenge. The leading streaming service released a list of the most popular female artists for International Women’s Day and found that Rihanna was the most listened to globally.

The Barbados-born singer’s 2012 hit “Diamonds” has been streamed nearly 240 million times and “FourFiveSeconds,” her collaboration with Paul McCartney and Kanye West, has more than 282 million listens. But Spotify said that Beyonce was the most popular among listeners who identified as female. Beyonce also was number one among Spotify users in the United States.

“Drunk in Love,” Beyonce’s ode to marital bliss with husband Jay Z, has been streamed more than 180 million times. Second to Rihanna on the global level was Ariana Grande and then Beyonce, followed by English singer Ellie Goulding and then Katy Perry.

Leading female hip-hop star Nicki Minaj, who did not figure in the global top 10, ranked second in the United States. Incidentally, Beyonce and Rihanna are two of the most prominent artists trying to promote Spotify’s upstart rival Tidal, which is led by Jay Z.

Taylor Swift, a top-selling woman in music, refuses to stream on Spotify due to criticism over the compensation. British ballad star Adele, who has not made her latest blockbuster album “25” available for streaming, placed eighth both globally and in the United States.