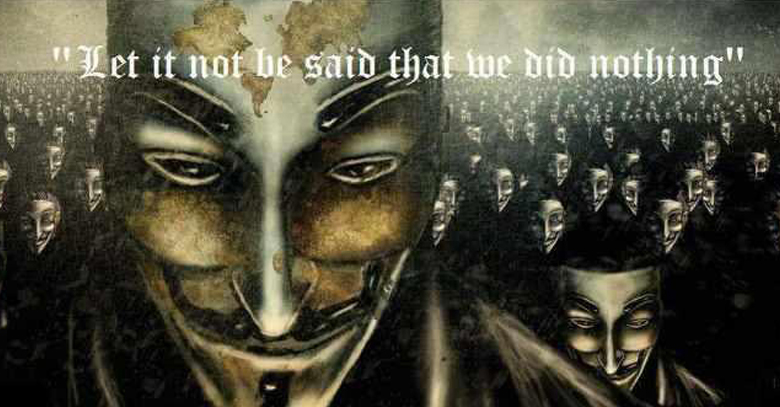 For those of you, who think the header above is merely a movie dialogue, I congratulate you for having the finest taste in choosing movies but it pains me to reveal that you, like practically all of us, only saw and did not observe, let alone the question of whether or not you ‘evolved’.

These sentences are more than just dialogues, they are ideas. Revolutionists are a dime a dozen these days but ideals are rare.

An event took place on this November the 5th this year which activist around the world called ‘Million Mask March’. Spurred by the Global Hacktivist collectively known as Anonymous, which launched a promotional video to call-in supporters from all religions, countries and tribes, the peaceful march took place in 450 cities around the globe.

Anonymous reportedly had alliances with WikiLeaks, The Pirate Party, Occupy and Oath Keepers to Unite Marchers, Occupiers, Whistleblowers and Hacktivists.

The official website for the Million Mask March, records all the sightings and news reports from the major news channels from around the world.

The supporters in the Million March wore ‘Guy Fawkes’ masks and protested the global government corruptions and economic inequalities.

It’s believed to be the first time Anonymous went beyond what had primarily been online activism to encourage a public protest in the streets of Washington D.C, New York, London, Amersterdam, Boston, Russia and even Mumbai.

November 5, 1605 is the date when Guy Fawkes, a British revolutionist, was found by the police, guarding massive explosive underneath the House of Lords. Fawkes’ ideal for establishment was rather unique, he believed in equality of power over any form of rule or government. Freedom to him was paramount for human salvation.

The date thus, is considered as the remembrance of Guy (literally the origination of the term ‘guy’ for rebellious males) who many might still consider a terrorist.

Guy Fawkes has become, quite literally, the face of modern-day anti-establishment protests. In the past few years, for example, it has shown up on the faces of Occupy Wall Street protesters, and earlier this year, it was worn by Bahraini protestors. Recently, the mask has appeared at protests against NSA surveillance.

November 5, 1605 was deemed as the day of the ‘Gun powder treason’, but ironically it’s remembered 408 years later by the enlightened as something much more idyllic.

“More than four hundred years ago a great citizen wished to embed the fifth of November forever in our memory. His hope was to remind the world that fairness, justice, and freedom are more than words, they are perspectives. So if you’ve seen nothing, if the crimes of this government remain unknown to you then I would suggest you allow the fifth of November to pass unmarked” – V for vendetta (2005).