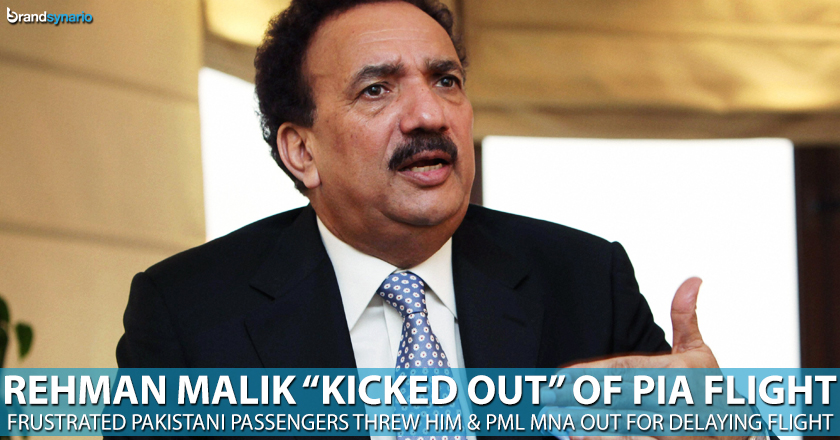 A group of frustrated Pakistanis kicks out Rehman Malik and PMLN’s sitting MNA Dr. Ramesh Kumar Vankwani out of PIA’s flight, for delaying it.

Yes! It seems Pakistanis have started to wake up from their moral slumber, as they took stand against the king-like conduct of these politicians.

The incident happened when PIA’s flight to Islamabad was delayed without any official reasons, upon continuous inquiries by the frustrated passengers, it was revealed that the flight is actually waiting for his royal Excellency Mr. Rehman Malik and his accomplice Dr. Ramesh Kumar Vankwani.

Watch Rehman Malik being humiliated and kicked out of PIA’s Flight:

[Update] Former Interior Minister Rehman malik has tweeted, that it was in fact a technical reason that the flight was delayed for three hours and the passengers aboard did not know anything. Not only that, he has also claimed that the ‘people who misbehaved with him were, PTI workers’. Well, that is a shocker!!

Why am I being linked with PMLN minister.i saw the noise with the minister and decided not to go on the flight as One PTI worker was yelling

Watch the Videos and judge for yourself:

Former Interior Minister Rehman Malik is accustomed to public humiliation, but it seems for Dr Ramesh, it was a rather new experience (judging by the shameless smile on his face and the guts to still sit on his seat after the humiliating scolding of the suffering passengers).

Dr Ramesh Wankvani(above) of PMLN who is also a sitting Member of National Assembly, was also reminded that ministers are actually public servants who get where they are through Public Votes – public who will not be bullied by them, public – who can throw them out anyday they want.

To be fair though, both of the gentlemen deserved every single second & every single humiliating word they deserved.