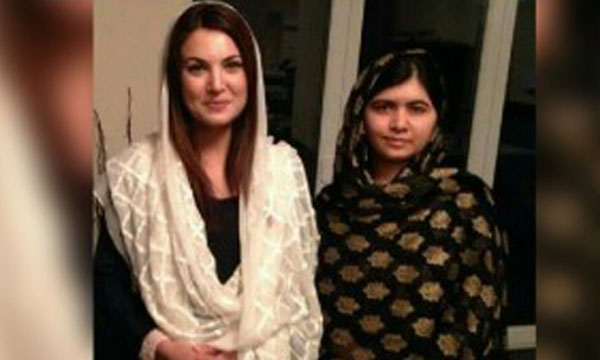 During the meeting, Reham Khan lauded the efforts of Malala and her constant fight for the education of young girls.

Speaking on the event, Reham Khan labeled Malala as a symbol of courage, bravery and a beam of hope for women all across the world. Malala Yousafzai was immensely grateful for Reham Khan’s visit.

These are a few images from the occasion;

The 18-year-old education activist has been campaigning for women’s education since a long time now through ‘Malala Fund’ which seeks to secure every girls’ right to at least 12 years of quality education.

Malala was shot in the forehead by Taliban while returning home from her school in October 2012. Later she was transferred to Queen Elizabeth Hospital in Birmingham. She has become a beacon of hope for women’s education ever since.

Read more: ‘I am Not Malala’ Campaign Launched to Counter ‘I am Malala’ Biography