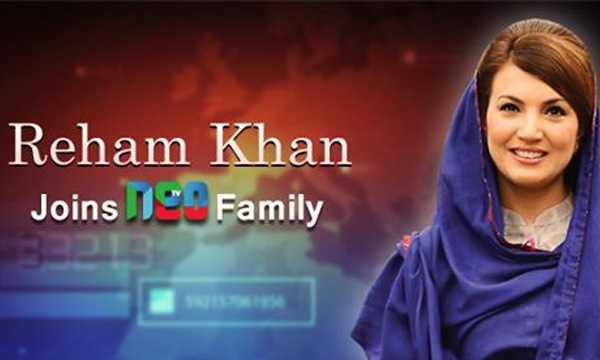 After much speculation, Reham Khan is back to business and she has officially joined Neo TV. Rumors of her joining GEO or Dunya Network were rife, but it has now been confirmed that she has indeed joined Neo TV.

Here is the confirmation by Neo TV:

Rumor has it, her new show on Neo TV will be called ‘Tabdeeli’.

After spending some time in London following her divorce, Reham Khan is back in Pakistan. She arrived in Karachi and has plans to visit Lahore, sources said.

The former BBC reporter was spotted with the Pakistani journalist, Mobeen Rasheed at the Heathrow airport in London. According to sources, Mr Rasheed has invited Reham Khan to a media conference a month ago and is said to produce her show on a private news channel in Pakistan.

Mobeen Rasheed has also taken her exclusive interview which was aired on Neo Television on November 30.