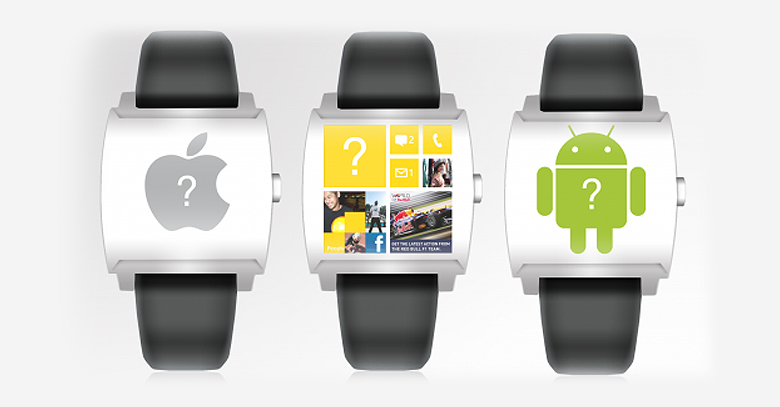 Did we ever imagine that an accessory which we wear on our wrist to get hold of time would become a multipurpose gadget? No, we did not.

But yet again, we stand awestruck with the speed with which the technology is evolving. The ‘smart people’ who came up with ‘smartphones’ and set to launch a ‘smartwatch’ that talks, walks, plays and stays with you just like a personal assistant. The best part is that it’s not just one tech-savvy company that is gifting us with this innovation; it’s the four technology giants – Apple Google, Microsoft and Samsung.

We have heard the silence before the thunder. The hurricane of ultimate technology is about to arrive so grab your popcorns and get ready to watch the ‘smartwatch’ war’.

From acquisitions to incubations, the technology giants have planned various initiatives to add value to their smartwatch. We have tried to catch the news about their strategies so that you get a preview as to what is going to happen in the smartwatch arena.

This player used the first mover advantage very well. We heard a lot of news about Samsung Galaxy Gear and its features along with the official announcement about its launch on September 4.

Samsung have scheduled the release right ahead of the IFA consumer electronics trade show in Berlin. The market is prepared to welcome this watch, with some loyal fans awaiting its arrival.

Samsung plans to use ‘fitness’ as the edge for their smartwatch. The pictures on VentureBeat show the device’s sleekness and health monitoring features. Technology Experts suggest that Samsung would not force a smartphone into a smartwatch. Rather, the emphasis would be on companionship with Galaxy S Android phones as well as fitness tracking.

The connection between Microsoft and Smartwatches may raise some eyebrows, but the company is reported to source components for a smart watch prototype, including 1.5-inch displays as per the Wall Street Journal on April 2013.

This is not the first time that the baby of Bill Gates has interacted with the watch industry. History tells us that the company developed a Smart Personal Object Technology (SPOT) application which was later utilized by high-end watch makers like Fossil, Swatch and Tissot.

However, with Steve Balmer’s, current CEO of Microsoft, farewell lined up, it is still ambiguous as to how Microsoft would handle the smartwatch symphony along with acquisitions of Nokia’s mobile business.

Google silently baited on an entrepreneurial venture and we saw WIMM Labs, a smart watch startup, creeping into its bag.

WIMM’s smartwatch has already made a mark for itself in the market for being a standalone gadget with no dependency on other software applications. Envisioning this, they had already started developing a platform and with Google’s acquisition, Android has joined in the league.

Experts expect that this smartwatch development would propel Google into the hardware side of things. The smartwatch initiative is expected to compete internally with Google’s console, with one of them hitting the market by the end of this year.

As they say ‘Nobody knows what is happening inside Apple’, hence all the news about ‘iWatch’ that we receive is through the grapevine.

With Apple patenting iWatch in Japan this June, there are hardly any doubts about the company’s participation in the smartwatch battalion.

The New York Times recently informed the fans about the company’s claim of “experimenting with the wristwatch-like devices made of curved glass” recently.

Furthermore, the Taiwanese press has reported Quanta and Inventec winning the contracts to build Apple’s first smart watch, with suggestions that they could build up to 38m units in 2014.

With such news in the air, we are ready to be bestowed with a savvy watch soon.

Research firm Canalys recently claimed that 500,000 smartwatches will be sold in 2013 and the technology giants seem to be all ready to make their best sales. With the above news and all the tech talks hitting our senses, we should definitely fasten our seat belts to welcome the revolution of smart watches.